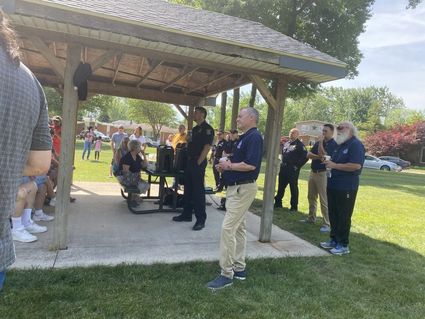 he Westland Police Department kicked off the inaugural Neighborhood Safety Program at Rotary Park on Saturday, June 5, 2021. The purpose of the meeting was to address neighborhood concerns including, traffic neighbor disputes, vandalism, thefts, potential drug activity and safety and for neighbors to meet one another. This meeting was directed toward businesses and homes between Marquette/Cherry Hill Roads and Wayne/Radcliff. The Westland Community Police team was there to listen to resident's concerns.

Attendance was estimated at 50 - 60 residents. Many residents were concerned about speeding in the vicinity of the park as well as drug dealing.

Westland resident Jackie Dobransky attended the meeting hoping to get a stop sign put in by her house. She said, "Kids [were] driving really fast down the park to Cherry Hill."

"The Westland Police Department is continuing to work toward improving traffic safety throughout our community. In an attempt to be more innovative in our investigations of traffic complaints, we have secured a federal grant which have allowed us to purchase three radar trailers and a speed spy.

Radar trailers provide the department with the date, time, and speed of the passing vehicles. With this information the Police Department is able to see the busiest time of day and the various speeds that the vehicles are traveling. Radar trailers show the speeds that are being traveled to motorists as they approach.

Like the radar trailers, a speed spy records date, time, and speed of passing vehicles but it is also able to record the direction that the traffic is traveling. The speed spy does not show drivers their speeds while passing. This provides the Westland Police Traffic Bureau more accurate data as motorists are not shown their speeds as they are with a radar trailer."

Police Chief Jeff Jedrusik said that one of main complaints received by the department is fireworks. This summer The City of Westland Fireworks Ordinance allows fireworks between June 29, 2021 and July 4, 2021 as well as the Saturday and Sunday immediately preceding Labor Day between 11:00 a.m. and 11:45 p.m. on each of those days.

Residents are encouraged to report firework violations outside of these times by calling the police department with specific location.

He also encourages residents to lock their cars and keep their porch and/or spot and sensor lights on to help prevent crimes.

One resident said he wanted more of a police presence around the park to discourage drug dealing.

Jedrusik responded, "I promise you you're going to see us here more."

Mayor William R. Wild encouraged residents to report blight and other problems via the Westland Click and Fix App.

Overall, the meeting was well received by attendees.

Becca Hickle and Zack Wyckoff, Westland residents, were very pleased with the meeting and felt their concerns were addressed.

The next program will be Saturday, June 19 at 10 a.m. in the Stottlemyer Park (4801 Dancy) neighborhood.

Officers Chad Bristol and Chaim Kozak are currently assigned as the Community Police and the Neighborhood Resource Officers for the City of Westland Police Department.

The Westland Police Department can be contacted at 734-722-9600 for non-emergencies as well as sharing additional information or concerns regarding community policing matters.