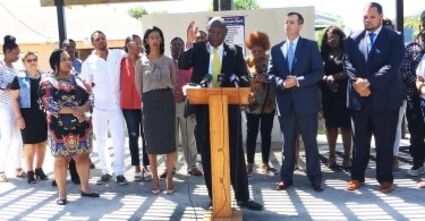 "We're uncovering unjustifiable, blatant discrimination against Black Americans by a number of major financial institutions," said attorney Ben Crump. "If this year has revealed anything, it's that Black Americans are too often treated like second class citizens in America. We won't stand for that any longer. We will hold these institutions accountable for their racist actions and get justice for employees or customers who have been wrongly terminated, discriminated against, or profiled."

Crump and Hilliard are reviewing bank discrimination cases in venues across the country. Together, they also represent hundreds of plaintiffs who were victimized by pharmaceutical giant Gilead's actions to withhold a safer HIV drug so it could maximize profits from a drug with potential to damage patients' bones and kidneys.

"In reviewing these cases against several financial institutions, we have uncovered a terrible pattern of racism against people of color," said Hilliard. "I'm honored to work alongside Ben Crump to correct these injustices and hold these institutions accountable."

Among the behaviors uncovered were these:

• Client and a few colleagues went to a well-known bank branch in California to cash checks they had received from their employer that day. The checks were drawn from an account at that bank. The bank employees refused to cash the checks, insisting that they were fraudulent. Client asked the teller to verify the check, and she was simply told "no."

Without verifying the checks, the bank employees called the police who soon arrived at the bank and detained the client, her daughter, and her other colleagues. After a long period of time, the checks were verified and cashed. The client was in fear for her safety as she watched the police handcuff her daughter and other colleagues all because she was attempting to make a simple bank transaction.

• In June of 2020, a client went to a well-known bank branch in Georgia to deposit a check. Client was wearing a Black Lives Matter t-shirt.

The Caucasian teller at the bank told our client "All lives matter" and refused to deposit his check. The client didn't create a scene, he just calmly left the bank after being discriminated against and denied services.

• A client who owns 18 popular fast-food franchises with great financial scores and sales was denied a $12 million business loan by a well-known bank even though he knows white franchise owners who have stores with worse financials who have been granted loans of this type.

Representatives from the fast-food corporation reached out to the bank to give their approval and recommendation that he be approved for the loan. The bank denied the loan for pretextual reasons, adding to the difficulty of being a black business owner.

• A client who received a notice from the bank saying they owe the balance of their mortgage in 90 days, or the bank will foreclose on their house - without any just cause and with several more years remaining on the loan