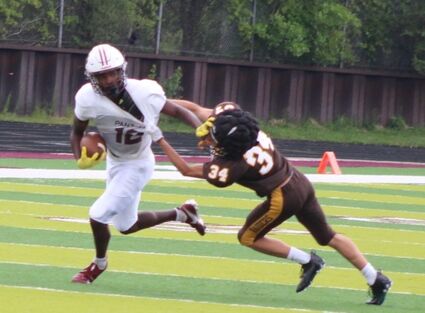 The 2020 season was a very unique one for every high school in the country. Games were canceled, seasons cut short, and extended at the same time. Some games leaked into the new year. The pandemic paused the program. But it didn't keep the River Rouge Panthers out of the MHSAA championship. The Panthers of Rouge fell short to the Panthers of DeWitt in a January MHSAA championship bout. Now, River Rouge is back into full stride, and ready to move forward.

The Panthers first game will be against Eastpointe in the Prep Kickoff Classic. The players are heating up. They are home from summer camp, and have had the chance to scrimmage against North Farmington.

"It's been a great Summer, and a great off season. Camp was great! Us not being able to go to camp last year was a big loss, just for the tradition of the program." States Offensive Line Coach Myles Campbell. "The fact that we were able to go this summer really makes the year official."

As a former player, Campbell can understand the importance of summer camp. This River Rouge football tradition is used for intense practices, skill tweaking, and player relationship building. Summer training camp was a success for all parties involved. Jalen Holly, Davonte Miles, and Nick Marsh led their teams through the darkness. Only to be leaders once the lights came on, and under the sun against North Farmington. Summer camp was a tool used to refine their leadership and position skills. Each player took a couple minutes out of practice to share a few words with me.

Jalen Holly - Right now I'm playing receiver, a little defensive back if the team needs me to. I've been a part of this program since I was born. It feels good to be a team caption for my home team. It's given me the opportunity to attend a division one college for free. I'm used to the pressure, I've been held accountable for things at a young age, so this isn't the most difficult thing I've been tasked with. I'm a quiet guy, the biggest challenge for me is becoming a more vocal leader, and expressing myself clearly during interviews.

Davonte Miles - I'm getting a grasp of playing on the offensive line, this is my first year at it. So far it's been fun, Coach Pettway and Coach Myles are great teachers. Defensive line is my speciality, but I'm athletic enough to play both. So if the team needs me on both sides of the ball, you'll see me on both sides of the ball. I'll put myself in any position possible for our best outcome. The goal is to win the state championship. My goal is to do my job, and lead us there with my actions. 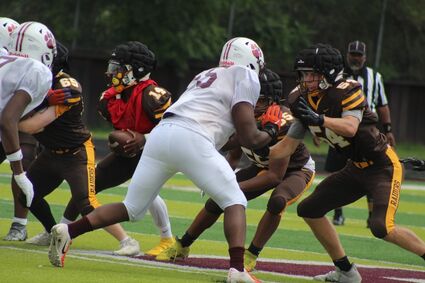 Nick Marsh - I'm a sophomore captain right now, so there's a lot of pressure on my back. But there's a consistent need for self improvement that keeps me motivated. My goal is to continue to grow over the next three years. I'm looking forward to progressing my foot work, route running, and hand eye coordination. Of course we want to win the state championship. I'm ready to be the clutch man that goes for the deep ball. I appreciate the support from the community, they're helping me to build myself and my brand.

The captains are locked in, and prepared to put it on the line for their team. With the support of it's coaches, fans, parents, and supporters, River Rouge is ready to fight it's way back to Ford Field.