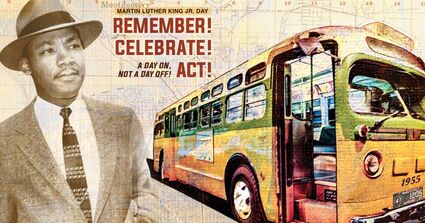 A young Rev. Dr. Martin Luther King, Jr. beside the bus that nobody rode on during the Montgomery Bus Boycott

On January 17, 2022, the Dr. Martin Luther King, Jr. holiday will mark the 27th anniversary of the national day of service. This day was established to honor the life and legacy of Dr. King, and to encourage all Americans to volunteer to improve their communities.

Americans celebrated the first official Martin Luther King Day, which is the only federal holiday commemorating an African-American, on Monday, January 20, 1986. In 1994, Congress designated the holiday as a national day of service, and marking the third Monday in January every year as the Martin Luther King, Jr. Day of Service - a "Day On, Not a Day Off."

Dr. King advocated for nonviolent resistance to overcome injustice as a means of lifting racial oppression. He created change with organized sit-ins, marches, and peaceful demonstrations that highlighted issues of inequality. Dr. King received the Nobel Peace Prize in 1964; he was the youngest person to ever receive this high honor. He followed in the footsteps of his grandfather and father by entering the ministry to become a Baptist minister. On April 4, 1968, at the age of 39, he was assassinated in Memphis, Tennessee as he stood on the balcony of his hotel. Dr. King traveled to Memphis, Tennessee to lead a march in support of striking sanitation workers.

We remember Dr. King as a husband, father, friend, and fierce advocate for the betterment of all people. Honor his memory by organizing, volunteering, and spreading the word. Remember to MAKE IT A DAY ON, NOT A DAY OFF, for you and those around you.

The Purpose of Education - Dr. Martin Luther King Jr. Excerpted from Morehouse College Student Paper, 1947 Education must enable one to sift and weigh evidence, to discern the true from the false, the real from the unreal, and the facts from the fiction. The function of education, therefore, is to teach one to think intensively and to think critically. We must remember that intelligence is not enough. Intelligence plus character--that is the goal of true education.