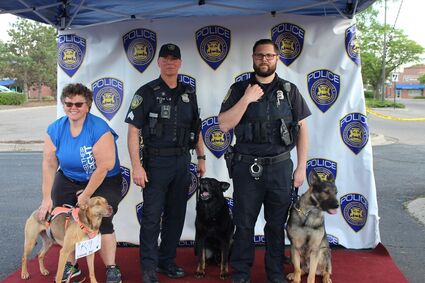 The Garden City Police Department's summer community engagement events kicked off on the evening of Thursday, June 2 with the second annual Walking the Beat with Rudy. Officer Bruce Shippe, one of the department's two K-9 handlers and K-9 Officer Rudy welcomed community members and their dogs to join them as they walked the downtown area of Garden City. Joining the lead was Officer Joe Stanley and K-9 Officer Blue, both of whom joined the department last fall. Shippe is also the department's Community Outreach Officer and has been creating such events to interact with the community members. "Rudy and I , since we moved to an afternoon shift, this is one of the things we always do, we walk the downtown district and meet people, we check in on businesses and take a break; a mile and a half takes us about an hour to do because he's so popular with the people," Shippe says with a laugh. He adds the experience gave him an idea for another community engagement event. "What a great opportunity to bring the people together, everybody likes to walk whether you have a dog or not, show up and walk the beat with a real K-9 officer." Nearly two dozen individuals and 13 dogs joined K-9 officers Rudy and Blue as they navigated the streets of downtown with their handlers, escorted at each intersection by patrol cars. The event, which is held early in the summer, is presented by the Garden City Downtown Development Authority (DDA) and sponsored by Lucky Dog Daycare and Boarding. 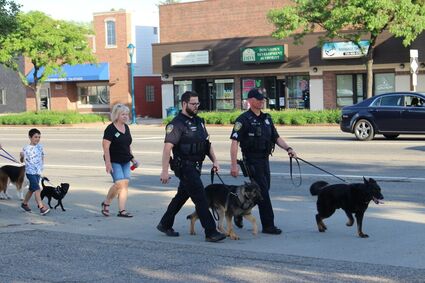 Shippe says the department's Cop on the Block and Coffee with a K-9 programs will begin again in June. Both programs are informal "meet and greet" types of events which give residents the opportunity to get to know the members of the police department and ask questions, discuss issues in the neighborhoods, or just chat and get acquainted, allowing residents to interact with the police in a context other than an emergency or negative situation.

Shippe says promoting that engagement between the police officers and the community is extremely important."Together we're stronger and we learn more about each other and we can help each other out," he says. "Working together, getting to know the public just makes it easier when you do have to meet. It builds confidence and trust, which is big in police departments nowadays and that's one of the things we enjoy with all of our programs."

Information about these upcoming events with the Garden City Police Department can be found at the department's Facebook page at http://www.facebook.com/gardencitypolice.