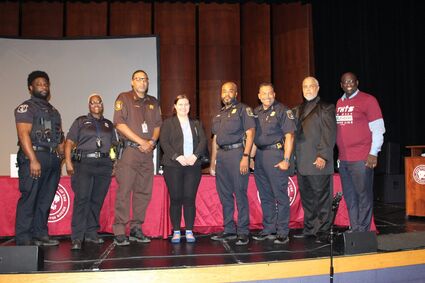 River Rouge Public Schools hosted a program focused on interactions with law enforcement for its nearly 250 upcoming graduates. Titled "Before You L.E.A.P.", the program was presented as an informational forum dealing with the impact that interacting with law enforcement can have on young peoples' mental health, including trauma. The program was designed for urban youth and was coordinated by the district's Department of Culture, Health, and Wellness.

The forum was held late in May in the auditorium at River Rouge High School using a town hall format. A panel of law enforcement experts from the Detroit Police Department, the Highland Park Police Department, the River Rouge Police Department, the Washtenaw County and Wayne County Sheriff's Departments, and the 36th District Court interacted with the students as various potential scenarios were presented and the question asked "What would you do in this situation?" In addition to gaining insights on the legal specifics of situations involving underage drinking, drug use, robbery and sexual assault, Psychiatric Nurse Practitioner Natalie Poole of Peace Counseling offered explanations on how such scenarios can affect mental health and self-esteem.

"We wanted to capture some of the scenarios that they would be in as they enter the prom and graduation seasons and in those particular settings, a myriad of mental health issues can occur from robbery to sexual assault, and we talked about drinking and smoking; all these different challenges that are barriers to a good social experience or to learning," said Bacari Alexander, Director of the Department of Culture, Health, and Wellness. "Because it's a mental health forum we wanted make sure that one of our therapy partners, Miss Natalie Poole, chime in and give them some tools to consider when they're in these situations and the law enforcement professional were there to do the same." 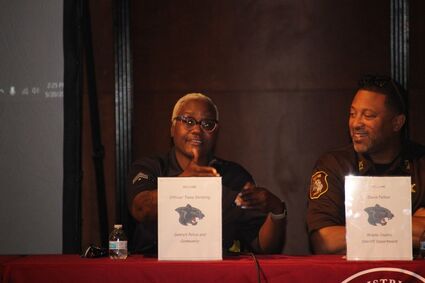 The hour-long program continued in a question and answer format, with eager students seeking answers on topics which included assault, weapons, self-defense, and what to do and not to do when confronted by a police officer. When the question was asked about how to respond to an angry police officer, Officer Tre Miller of the River Rouge Police Department spoke up, saying, "In my experience, when you have something small like a noise complaint, nine times out of ten we just want to get there and see what's going on. But a lot of times the younger generation, they love to be combative, they love to argue, and your anger won't do anything to help the situation out. Just sit there cooperate with them, answer questions respectfully and then whatever happens happens, you'll likely end up going home because you're not doing anything that's crazy." When Officer Tonia Stribling of the Detroit Police Department and Natalie Poole both relayed their unpleasant experiences with disagreeable officers during traffic stops, both described situations which could have escalated but did not because they behaved calmly and respectfully as Officer Miller had advised. David Felton of the Wayne County Sheriff's Department commented, urging the students to act as Stribling and Poole both did and to think before reacting and saying anything disrespectful.

In all, students in the class of 2022 were given useful information to keep in mind as they head out into the larger world. Alexander was pleased the forum was so well-received by the students and says there will be more such programs in the district, and added, "We start everything here in River Rouge with the end in mind. What we wanted to do with this Before You L.E.A.P. Program-which stands for Law Enforcement and Policing-is to give the young people an opportunity to look at that sandwich approach; what are the therapeutic considerations before interacting with the police, what are they during, and what are they after? So our desire to continue these types of series is something we definitely want to do."