Students Highlight Environmental Issues One Image at a Time 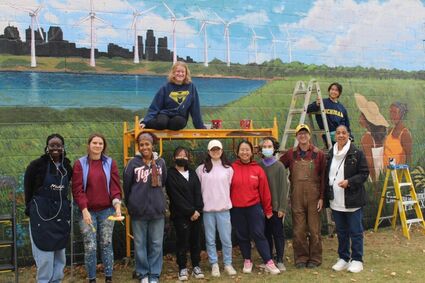 U of M Professor Joe Trumpey and community activist Theresa Landrum (far right) pose with university students as they complete a mrual in Detroit's 48217 zip code.

An old saying goes "A picture is worth a thousand words." When it comes to conveying the many ideas behind the environmental justice movement in Michigan, pictures really can say a lot. In 2018, when the Trump Administration threatened funding for Great Lakes restoration efforts, University of Michigan's School of Art and Design professor Joseph Trumpey began offering a new course for art students called Environmental Murals Partnership, offering students the opportunity to develop their creative talent while promoting current ecological issues that were in danger of being ignored.

Partnering with local organizations, Trumpey was introduced to Detroit resident and environmental activist Theresa Landrum, who has worked for more than 25 years to promote the environmental injustices faced by residents living in Michigan's most polluted zip code, 48217. Landrum worked with the Sierra Club to offer "toxic tours" of the neighborhoods in the zip code, drawing attention to the industrial sites located in those neighborhoods that were responsible for polluting the air, soil, and water."I was introduced to Professor Trumpey and took his class on a tour. They said, 'Miss Landrum, we want to highlight this, we want to tell people. How can we do it?'" recalls Landrum. The students explained their class was all about focusing on ecological issues by painting murals. "I said, well, we can paint some murals. This is one of the ways that we can connect to make people think we have to be good stewards of Mother Earth."

The group sought out community partners, business owners in the area who were willing to allow their buildings to be used as canvases for murals. As the fall 2022 session of Trumpey's Environmental Murals Partnership class nears the end of the semester, the 22 students enrolled have completed 7 murals in the 48217 zip code. The projects met the course's stated goals of increased community understanding, awareness, engagement, and beautification. The students also developed their ability to work as a team.

"We're trying to give voice to the community and bring about positive images of change and how to get active and clean up the air and water and everything else," says Trumpey. The students get something out of the activity as well. "The other facet of this is the experience for the students to be able to build empathy and understand the human cost of industry and fossil fuel use, things that they're not used to thinking about," he adds. 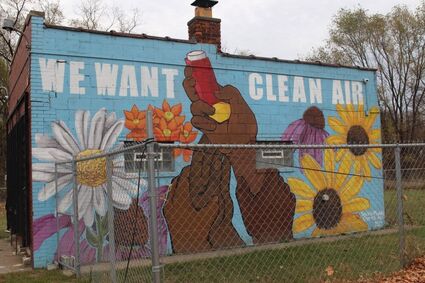 Senior Lucy Sun, a native of Overland Park, Kansas, says, "It's a lot of collaboration; going around with Theresa was very interesting and taught me a lot about different issues in the community that not a lot of people talk about. My eyes have been opened and it's been a really good time." Sun will graduate the University of Michigan with dual degrees in Art and Mechanical Engineering.

While the course may spark some of the students to pursue a career as a muralist, Trumpey says developing critical thinking skills is just as important. "One half of this is thinking about painting murals and the other half is thinking about the context of this community and the environmental challenges that they're facing," he says. He adds that for a final project, each student will research an environmental issue affecting their hometown and will design a mural to address that issue.

To find out more about the course, the murals and their locations, contact Trumpey at [email protected]