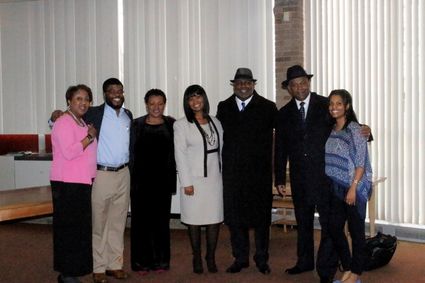 On Wednesday, March 28, many exceptional students attending Robichaud High School in Dearborn Heights, got a chance to express their concerns to local elected officials in the school library. The issues, chosen by the students for the event, ranged from peer pressure to school safety and included such topics as global warming, substance abuse, and school finances, among others.

The event was an NAACP Forum titled "Let's Talk," and was held in conjunction with the NAACP of Western Wayne County and the Westwood School District. The forum was organized by Gina Steward and Caroline Smith of the NAACP, Jasmine Noble, the College Ambition Program (CAP) Coordinator, and teachers David Lewis and Natia McLendon.

The event filled the latter half of the school day. Students filled tables in the library and elected officials rotated from table to table, discussing the issues the students themselves had decided they wanted most to discuss. Recent topics in the news such as gun violence and police profiling were popular subjects for discussion. Teacher David Lewis watched the deliberation unfold and expressed his satisfaction with the students' engagement with the adults. "It is just what I envisioned," he said.

Keith Williams of the Wayne County Sheriff Department was impressed with the reasoning of the students on the subjects of concern. "They can be inspired if somebody will give them direction," he said. He added that if the students are willing to identify what's bothering them and talk it out, they will find solutions.

Caroline Smith, the Western Wayne County NAACP's Youth Engagement Committee Chairperson, was pleased with the interaction and information the youth shared. "We will take the 'Let's Talk' Program to other schools in our coverage area."

The Western Wayne County NAACP Branch meets the 2nd Monday of each month at 7:00pm. The next meeting will be held on May 9th at Christian Faith Ministries located at 27500 Marquette in Garden City. The informational session will address the Michigan Department of Civil Rights.