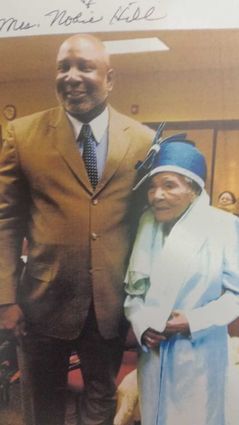 Local history is alive and well in the city of Inkster. At a recent city council meeting, the organization, Inkster Citizens Who Care, presented the city with a photograph display honoring Inkster residents who are 100 years of age or older. The display was titled, "The 2017 History Making Centenarians of Inkster, Michigan." Attendees of the city council meeting were delighted when one of the honorees, Mrs.Nobie Hill, 105, entered the meeting. The display also featured a large photograph of Mrs. Jeralean Talley who, at the age of 116, was named the oldest living person in the world in 2015. A resident of Inkster, Mrs. Talley passed away in July of 2015.

Inkster Mayor Byron Nolen declared that a section of the wall space in the council chambers be called The Centenarians Wall, which is reserved for pictures of all Inkster residents who reach the age of 100.

Earlier this year, Inkster Citizens Who Care held their annual Spring Luncheon to honor Inkster's centenarians, and Rev. Washington was the only honoree able to be in attendance. Washington passed away in October 2017.

If anyone is aware of an Inkster resident who is 100 years or older, they can be honored on the city's Centenarians Wall. Contact Theola Jones at 313-561-3918 for more information.