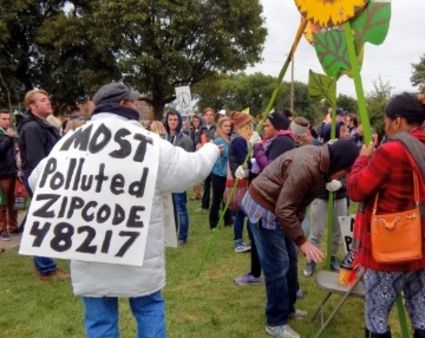 The city of Flint has the highest levels of lead in children in Michigan, according to a 2016 Data Report from Michigan's Childhood Lead Poisoning Prevention Program. High levels of lead were also detected in children in the cities of Detroit and Highland Park. Once contaminated a child loses the capacity to absorb iron, a mineral crucial to brain, nerve, and brain development. Lead also interferes with regular brain functions and is linked to problems with hearing, sight, and learning. It can also cause hyperactivity, anti-social behavior and violent outbursts.

Lead poisoning is usually thought to come from lead-based paint in older houses, but experts say there often more lead in the ground that on the walls.

Smelter sites and industrial sized incinerators are a major source of lead contamination, and they release thousands of pounds of lead into Detroit's environment annually.

One of the hot-spots for pollution is the Detroit Renewable Power incinerator on the city's eastside. The plant reportedly burns tons of garbage each day to generate steam and electricity, and in the process, pollutes the air and causes numerous health problems particularly those associated with lung disease like asthma. And again, it is children who are more susceptible to be harmed.

The bad smell from the incinerator is only a sign of something more sinister. It releases toxic chemicals and particulate emissions into the Detroit environment which can be linked to premature death, hospitalization, childhood asthma and other ailments and conditions.

Another major source of pollution in Detroit is the Marathon Ashland Petroleum refinery located just north of Shaefer and I-75.

According to the Facility Detail Report compiled by the Environmental Protection Agency (EPA), the Detroit area refinery releases tons of benzene and toluene into the air. Benzene, a colorless, volatile liquid is acutely toxic when ingested or inhaled and is very detrimental to humans and eco-systems. And toluene is an addictive substance known to cause dizziness, headaches, muscular weakness, and even blindness. "A facility like Marathon has gotten larger over time, "said Guy Williams, President and CEO of Detroiters Working for Environmental Justice. "And it's releasing more pollutants, even though some of the technology is improving, the collective impact of pollution on the environment in those neighborhoods is not improving. Also, the southwest Detroit area is an area that is being exposed to pollutants along with chemicals in the form of fine dust. These particles, that are extremely small and are inhaled into the lungs, are responsible for many ailments."

The EPA filed suit against the Marathon Ashland Petroleum company in 1999 for violations of the Clean Air Act. Since then the facility has made some attempts to lessen pollution. And according to Honor Sheard, Marathon environmental security and safety manager, the refinery has taken measures to lessen the harmful environmental impact and has helped people relocate who wanted to move. Yet, residents that live near the refinery still complain of illnesses that they attribute to the morbid smoke and dust that is constantly spewing in the area. "Contrary to what many people believe, Marathon is not the biggest polluter in southwest Detroit," said environmental activist, Rhonda Anderson. "DTE is because of its coal-fired power plants."

Just a few miles east of Marathon Ashland Petroleum is a section of Detroit known as Delray. Sandwiched between Fort street and the Detroit River, and spanning the area from the Ambassador Bridge to Zug Island, it has the reputation of being, perhaps, the most polluted and blighted area in all of Detroit.

Many of the residents have filed class action law suits against several companies accusing them of polluting the environment and poisoning the people and they've lodged hundreds of complaints with federal, state, county and city agencies citing foul odors and toxic emissions. Residents believe that most of the pollution comes from Zug Island, a heavily industrialized man-made island located at the southern city limits of Detroit. Reportedly, the neighborhoods around Zug Island comprise some of the most polluted zip codes in Michigan and air quality samples have detected lead and butanone and residents near the island have been afflicted with high levels of cancer, asthma, and other disorders. 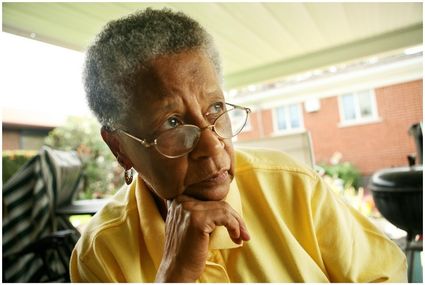 Statistics show that landfills, hazardous waste sites, oil refineries, and other environmentally hazardous industrial sites are usually located in communities of color, and Black communities have higher exposure rates than anyone.

According to information compiled by the Center for American Progress, lead poisoning disproportionately affects children of color; water contamination primarily affects poor communities and communities of color across America, and communities of color have the highest exposure rates to air pollution in the nation. "When you look at it, it's all economics," said renowned southwest Detroit environmentalist, Dr. Delores Leonard. "And we're collateral damage. We're just in the way."