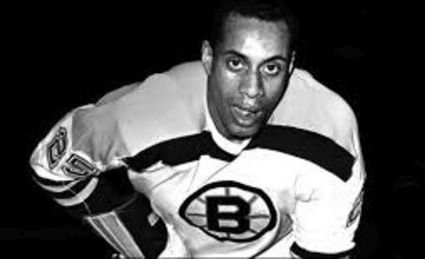 It was 1958 and a little known winger, from the Quebec Aces, was called up to the Boston Bruins. That winger was Willie O'Ree, the first black hockey player in the National Hockey League.

He is often referred to as the "Jackie Robinson of Hockey", though he might argue you about that.

It then took 16 years and league expansion for the next black player, Mike Marson, was drafted by the Washington Capitols in 1974. By the mid 2010s, there were 23 black players in the NHL, the most prominent being P.K. Subban.

Being Canadian, O'Ree didn't get much discrimination until he played in U.S. cities. One such taunt was "How come you not picking cotton". To me that is funny, because where Willie is from, Fredericton, New Brunswick, there is no cotton. He played two games in '58 and came back in 1961 to play another 43.

He spent most of his time playing in the minors, mostly in the Western Hockey League with the Los Angeles Blades and the San Diego Gulls.

The Gulls retired O'Ree's number, which hangs in the rafters at the San Diego Sports Arena.

In 1998, he was approached by the NHL to head up youth developement for its diversity task force.

The NHL/USA Hockey Diversity Task Force is a non-profit program for minority youth that encourages them to learn and play hockey.

In 2000, O'Ree was awarded the Order of Canada, Canada's highest civilian award.

He is entering the Hall of Fame as a builder, instead of player.

Fitting, since he has done more to bring hockey to minority children. Willie continued to play in the minors until the age of 43.

Jim has been a contributor to the Telegram for over five years. You can email him at [email protected]