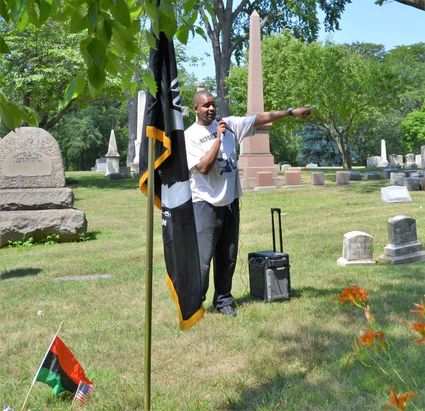 DETROIT -- James Robinson, an enslaved veteran, preacher and author, was honored at an Independence Day memorial service at his gravesite at historic Elmwood Cemetery.

Under the auspices of the Detroit Association for the Study of African American Life and History (ASALH) the service included a wreath laying along with a presentation by the Michigan Veterans Foundation color guard.

Genealogist, photojournalist and African-American military researcher, Dale Rich spoke Me a Limb, Some Blood, and Almost My Life," Robinson expressed guarded optimism in the face of dire conditions.

"While I look over the long history of my life, and can see many, many events of the most heart-sickening character connected with the system of Christian slavery, I can now see hopes of a brighter day for those who suffer under that system."

Robinson also wrote about the treacherous conditions of war, this excerpt regarding the Battle of New Orleans: "When we came to the swamps in Louisiana, the water in some places was knee deep, with thick green scum over it, which we had to remove before we could get to the stinking water.

"At night we made little piles of brush, wood and grass for our beds. Here the mosquitoes, gallinippers and the red-belly snakes, at night when we laid down, contested with one another, over our bodies, which should get the greatest share of blood before morning. We had to sleep with one eye, keep awake with the other, in order to keep off the snakes, which we would thrust away a dozen times a night."

At length, Robinson converted to Christianity and subsequently joined the Wesleyan Methodist Church and was licensed to preach. He spent the balance of his life traveling and declaring the Gospel. Although confined to bed for the last two years of his life, Robinson, a great orator, was said to have never complained. 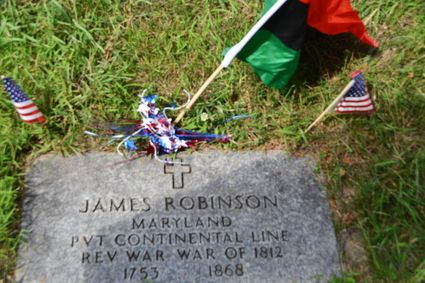 The President of Detroit Chapter of ASALH, Jamon Jordan, gives an overview of the event and a visual tour of the cemetary

According to a published account of Robinson's funeral, "This old man was very well known to many of our citizens, and they attended his funeral on Tuesday, as also did hundreds of colored people."

"As our nation continues to wrestle with its ideals, it is crucial to remember men like Robinson, and to remind ourselves of the inherent ability of all Americans to strive and overcome," Rich said.

Father Robinson, as he was commonly known, was survived by a wife and at least two children, records show.

*The Association for the Study of African American Life and History was founded in 1915 by Carter G. Woodson, known as the father of black history. The organization is dedicated to the study and appreciation African American history.

For more information on The Association for the Study of African American Life and History visit their Facebook page.