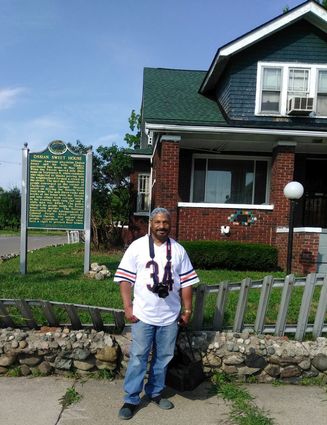 At first glance, If not for the presence of the sign designating the house a historic site, there is little to distinguish it from the rows of dilapidated buildings that surround it. The one and a half story structure is the place where in 1925, Black doctor Ossian Sweet along with his friends and family were set upon by a mob of

hundreds of Whites who did not want Blacks living among them. The Whites, crazed with racial fears and hatreds, assaulted the Sweet home with bricks and stones while screaming racial epitaphs and deadly intentions. Dr. Sweet, who'd witnessed the burning alive of a Black man by Whites when he was a boy growing up in Barstow Florida, had recently moved in the house located at the intersection of Garland and Charlevoix streets on Detroit's east side. And although he did want trouble, he was prepared to defend his home and family if there was. During the assault, shots rang out from an upstairs room and two White men fell. One died and the other was seriously wounded. The police, who'd idly stood by when the Sweet's home was attacked, now sprang into action and arrested all eleven occupants of the house, including Sweet's wife

Gladys, and charged them with murder.

The NAACP, the premiere American civil rights organization at the time, requested the assistance of Clarence Darrow, the most famous criminal defense lawyer in the nation, to defend them. Darrow, known for his empathy for the plight of Black Americans as well as his fierce eloquence and sense of justice, agreed to take the case.

The trial is one of the most renowned of the 20th century. It encompassed issues of race relations, legal and de facto segregation, civil and human rights, as well as courtroom maleficence and excellence. Darrow intentionally broadened the horizon of the trial, taking it from the confines of an isolated incident on a Detroit

night, and presenting it through the lens of centuries of Black suffering, exploitation, and racial terror in America. At one point, Dr. Sweet took the stand and explained his state of mind during the assault on his home. "I realized I was facing the same mob that had hounded my people throughout its entire history. In my mind, I was pretty confident of what I was up against with my back against the wall. I was filled with a peculiar fear, the kind no one could feel unless they had known the history of our race. I knew what mobs had done to my people before." And Clarence Darrow, standing before the jury, likened the mob to a raging and rabid beast. "Let me tell you about the dangers of a mob, "said Darrow. "It is not what they do. It is what they might do. You gentlemen know the danger. One man may not bother about driving a Negro out of his home, but get 100, 50, 1000, one man gathers from another, and mob psychology is the most dreadful psychology that man has to contend with. It is like setting a prairie fire, this gathering of a mob."

The trial ended in a hung jury, and later all charges were dismissed, but the racism and the conditions that caused the Sweet case still burden America. Racial violence against Blacks is still very much a part of the nation's consciousness, economic exploitation along with de facto segregation are still firmly entrenched, and the American judicial system and penal institutions are still places that target Blacks for mistreatment and brutality. Moreover, the racial housing barriers and segregated communities of 1920's America which fueled the vicious assault on Ossian Sweet's Detroit home, was not just a matter of individual prejudices. It was (and is) established by policies empowered through federal, state, and municipal authorities working in concert with unscrupulous banks, real estate, and finance companies. And it is often undergirded by America's court

systems. "If government had declined to build racially separate public housing in cities where segregation

hadn't previously taken root, and instead had scattered integrated development throughout the community,

those cities might have developed in a less racially toxic fashion, with fewer desperate ghettos and more diverse suburbs," writes Richard Rothstein in his reveling book, The Color of Law. 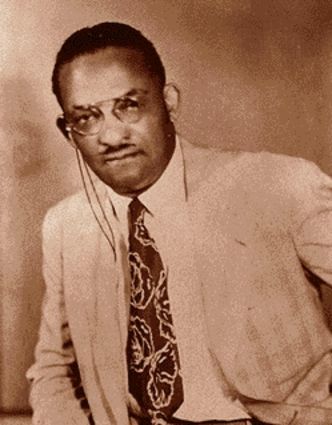 Dr. Ossian Sweet was never put on trial again for what transpired on that chaotic summer evening in 1925. Sweet lived in his east side home for several years, then sold it to another Black family in 1958. His wife and infant daughter died years earlier from tuberculosis contracted while she was incarcerated in the Detroit jail. Sweet eventually gave up his physician's license and opened a pharmacy where he lived in a small apartment above the shop. He married twice more, but perhaps because of the phantoms of his tortuous past, both unions ended in divorce. In 1960, he was found dead in his room above the pharmacy of an apparent suicide. He was 64 years old. Although the record indicates that the building is currently owned by a person unrelated to Dr. Sweet or his descendants, the house will always be known as the Sweet house. The residence is in desperate need of repair and maintenance. The aluminum picket style fence provides a fragile barrier and is collapsing at several points around the house. Much of the paint is fading, the wood in the roof overlooking the porch is crumbling in several spots, and the concrete steps are marred by a large gap. Yet, despite this, the home seems to radiate an inner strength and dignity; still standing after all these decades. Battered but not broken and refusing to give up its place in history.