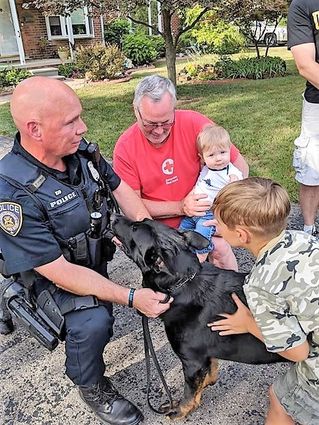 Families come out to say 'Hi' to Rudy

For most people, an interaction with a police officer is not necessarily a positive thing. Most folks encounter a police officer in the context of a negative situation, such as an auto accident, a burglary, or a traffic ticket. Police officer Bruce Shippe wants to change that perception.

Officer Shippe is the Garden City Police Department's K-9 Officer and newly named Community Outreach Officer. Shippe, who has been with the department since 1999, relishes the task of making connections with the community he serves. Early this year, Shippe brought to Police Chief Tim Gibbons an idea for a program which would promote interaction between police officers and residents. What developed from that initial idea are two programs currently being implemented in Garden City: Cop on the Block and Coffee with a K-9. Both have been well-received by Garden City residents.

Cop on the Block is an informal "meet and greet" for residents to meet members of their police department. Shippe says that 3 to 5 officers usually attend the event with him. The event takes place within a neighborhood setting. A host within the neighborhood provides a front lawn area for the event and helps promote it through flyers and word of mouth. Shippe emphasizes that there is no agenda and no formal presentation. The event lasts about an hour and can attract as many as 30 people. Also attending Cop on the Block events is Shippe's partner, Rudy the police dog. Shippe says everybody loves a dog and Rudy makes people feel at ease and comfortable about striking up conversation with the officers.

Sometimes residents ask questions about the officers' jobs or relate to them issues within the neighborhood they feel are of importance. Sometimes, the discussion is focused on local sports teams. Police Chief Tim Gibbons says the main goal is to break down the barrier which can exist between residents and police officers. He adds that he is very pleased with how residents have responded. Both programs allow residents to interact with the police in a context other than an emergency or negative situation.

Cop on the Block events are open to all Garden City residents. "We ask everybody to come," Shippe says. "We don't care where you're at in the city, that's just the area we're hosting it in." Currently, the department is handling one event per month through the end of the summer. Shippe hopes to expand the event next summer.

Coffee with a K-9 is the second program to be introduced this year. While the goal of connecting with residents is the same, the format is a bit different. On August 9, Coffee with a K-9 was hosted at the Straight Farmhouse on Merriman Road. The event was an informal sit-down coffee hour and Rudy was the main attraction. Residents asked questions and learned about Rudy, his training and his capabilities. Other topics were discussed as well, which included distracted driving and gun laws within the state. Several members of the police department were on hand including Chief Gibbons. All in attendance were treated to coffee and doughnuts, courtesy of the Straight Farmhouse Museum. 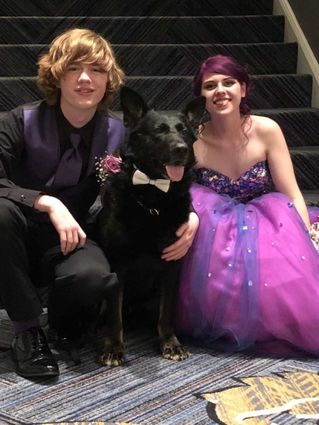 Shippe says the goal of both programs is to "build better relationships with the community in a friendly environment, such as their front lawn." He adds that both he and several of the other officers have been warmly greeted by residents who recall having met them previously at one of the events. As for building community, Shippe adds, "It's working."

The Garden City Police Department will be hosting a Bike Rodeo for kids near the end of August at the police station. The event will include bicycle safety checks. Details are pending but will be found on the department's Facebook page. If you would like to know more about either program or learn where Officer Shippe and Rudy will be appearing, check the department's Facebook page or contact Shippe at [email protected]