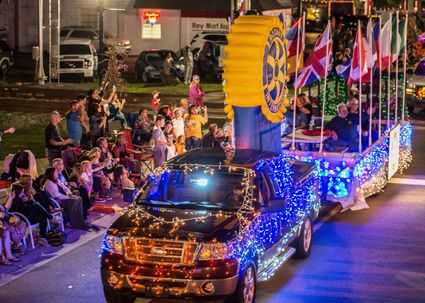 ROMULUS – The 20th annual Parade of Lights kicks off the City of Romulus Pumpkin Festival at 8 p.m. Friday, September 21.

Dozens of lighted vehicles, floats, people and even animals will parade in front of thousands of residents and visitors throughout Downtown Romulus.

The Romulus Rotary Club anticipates dozens of entries with $100 prizes being awarded to the winners in each of six categories: commercial, motorized, non-motorized (people/animal-powered), classic cars (and other forms of transportation), live music and schools. All entries and participates must be decorated with working lights – the more lights the better.

There is no fee to enter and advance registration is requested, but not mandatory. The night of the parade, participants start assembling at 6:30 on Goddard Road west of Wayne Road. Participants can arrive no later than 7:30 p.m. At 8 p.m., rain or shine, the parade makes its way west and south toward Five Points.

At the end of the parade route, participants are invited to enjoy free refreshments at the Progressive Club Hall, 11580 Ozga Street.

The application and a complete set of rules can be found at http://www.facebook.com/RomulusRotary and http://www.romulusgov.com/PumpkinFestival.

Organizers request that the application be filled out and mailed to Romulus Rotary Parade of Lights, PO Box 74485, Romulus, MI 48174. While advance registration is appreciated by the September 19 deadline, interested participants may also register at the parade assembly location the night of the event.

Besides providing a sight to behold, the goal of the parade is to capitalize on the nighttime aspect while keeping it safe for everyone by providing an abundance of lights on the entries. Glow sticks are not sufficient lighting. Entries not meeting the lighting expectation will be turned away at the lineup.

Photos are taken of the entries as parade through town. The pictures will be posted on the Romulus Rotary Club's Facebook page, http://www.facebook.com/RomulusRotary. For the first time, the winners will be determined by the number of "likes" each photo

receives. The winners will be invited to a Romulus Rotary meeting to receive a certificate, a free dinner and a $100 prize donated by local businesses.

Most recently, the club partnered with the Romulus Historical Society to clean and organize the basement of the Kingsley House, one of the historic buildings in the Downtown Historical Park. The club also donates dictionaries each school year to every third-grade student in Romulus. Rotarians cook and provide breakfast each year as part of the annual community Martin Luther King Jr. celebration. They also provide scholarships to graduating Romulus High School seniors.

The Rotary Club always participates in the parade as well with a truck and trailer decorated with an abundance of lights and flags from around the world representing the worldwide community of Rotary International. Riding on the float will be members of the Romulus Rotary Club and other area clubs, along with previous scholarship winners.