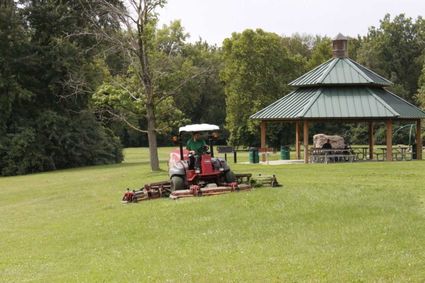 Chances are good you've spent some time in Wayne County Parks this summer. Perhaps you attended the Saturdays in the Park in Hines Park, spent time on the Inkster Valley Golf Course, or attended Jazz on the River at Elizabeth Park. Whatever your destination, the time you spent enjoying the outdoors was made possible in part due to the tireless work of a "ghost crew" who keep the county's parks clean and well-maintained.

The Wayne County Parks System is comprised of 37 separate parks, including the Lower Rouge Parkway area and Crosswinds Marsh, located in Sumpter Township. The park system also includes a golf course and a marina. Altogether, the park system makes up 5,600 acres of parkland to be maintained. It is all kept in good use by a team of 48 employees.

The jobs are varied and Wayne County's Manager of Maintenance, Raymond Glenn, says his work crew tends to the obvious: mowing, trimming trees, collecting trash and keeping picnic areas tidy. They also handle such seemingly insignificant tasks as repairing picnic tables and maintaining all the signage in the parks.

The parks maintenance crew works seven days a week. For some, the workday begins at 6 a.m. For the afternoon shift, the day ends by 11 p.m. Due to the county's size, Glenn says the department tries its best to accommodate workers' preferences for work location, depending on where they live. "We try to geographically, you know, accommodate people because we're spread out, "he says. "Some of our employees live in Westland, Dearborn Heights, and Garden City, and we try to keep them over here," he says, speaking of Hines Park. Likewise, workers who live near Trenton or Wyandotte are assigned to Elizabeth Park or the Wildlife Refuge Gateway. "It's 48 people spread out amongst, you know, the miles of park that we have."

By the time October rolls around each year, Glenn says the maintenance crew's major area of focus becomes setting up for the Wayne County Lightfest Show along Hines Drive. The display takes six weeks to set up and the work originates in the park's Wallaceville maintenance yard. "Once September 30th hits, we go right into 'Lightfest mode,'" Glenn says. "All employees everywhere comes and go to Wallaceville and sets up the Lightfest." Glenn adds that the Lightfest is the most demanding job the maintenance crew handles each year. In addition to set up and take down, the maintenance workers also close the roads and help the recreation department with admission collection as cars drive in to see the show. Altogether, Glenn says, the entire process takes one-quarter of the year. "But the other stuff's all important, too," Glenn adds. "You can't slip up and have a dirty park, you know, or an unmowed park."

Glenn has been with Wayne County Parks since 1992. He enjoys the job and says, "I like the variety, the different things that we do, it's not repetitive. I think the fact that you're outdoors, and every day is something different. I like that." In addition to custodial and landscaping duties, the team also handles picnic permits, grooming the many athletic fields the parks offer, and maintaining horseback and hiking trails.

Glenn says that if residents haven't been in one of Wayne County's parks, lately, to come out and see what's there. "Once you start getting out and exploring, and looking at some of the wildlife areas, it's pretty impressive, I mean, you're back in nature. It's untouched," he says. "Just get out and see everything we have to offer."