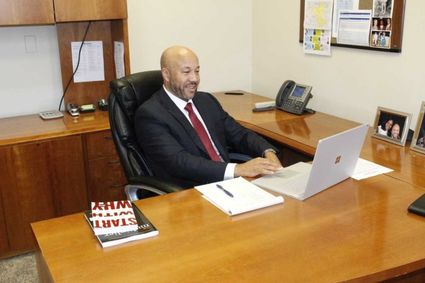 Simmons brings with him to Westwood a bounty of experience in the educational field. He began his career as an educator in the Detroit Public Schools District as an elementary school teacher. While in his position there, he became involved with Cub Scouts, serving as a leader and mentor to young boys.

While in Detroit, he also served for two years as a Reading First Literacy Coach. Reading First was a federal literacy program launched by President George W. Bush in 2002. "Reading is one of my passions," Simmons says. As a teacher, Simmons observed many students who struggled with reading in the classroom. He came to understand that merely providing instruction and a good environment does not necessarily produce reading excellence in youngsters. "I really began to investigate how I could help students become proficient in reading," he says. "That was a great opportunity where I learned a ton about reading, the reading process, and all that." Simmons' experiences in mentoring and educational guidance motivated him to aspire to be a school leader.

A leadership role is where Simmons found himself in 2007 when he accepted the role of elementary school principal in the Baldwin Community School District, north of Grand Rapids. He remained in Baldwin for two years then moved on to Washington, D.C., where he was chief administrative officer for Mosaica Education, a charter school management company.

In 2009, Baldwin School District was calling, asking Simmons to accept the job of superintendent for the district. He accepted the position and the Simmons family moved back to Michigan. While superintendent in Baldwin, Simmons worked closely with staff, parents and the community. Under his leadership, the graduation rate for Baldwin Senior High School rose from 55 percent when he arrived, to 90.9 percent in 2016.

Simmons was born and raised in Detroit and attended Detroit Public Schools. He completed his high school education in Oak Park Public Schools when his family moved there. Simmons says his father stressed the importance of education. While the family struggled financially, education was the route to a better life, his father told him. Simmons says he wanted to believe what he was being told, but it was difficult when he saw his buddies selling drugs and, as a result, having the money for nice clothes, fancy cars and female attention. "I come from a pretty tough background," he says. "I'm just fortunate that God had a higher purpose for me, and so, that's one of my motivations to work in communities like Detroit, and Baldwin, and Westwood, because I know there are a lot of kids here that have similar challenges and they just need someone to say, 'Hey, you can do it too.'"

Simmons and his wife have been married for 21 years. They have three beautiful

Simmons intends to use all practical resources and programs already in place to help students understand that they can move up the education ladder and escape the environment they are in, if they choose to. He is considering what else may be implemented within the district to help students achieve. He also hopes such students will turn around and take the education they have acquired and use it to help others in similar situations.

One change to the district Simmons is looking at is to create a scholarship program which will pay for any graduate from Westwood Schools to attend a 2-year community college or a 4-year university, anywhere in Michigan. Simmons had implemented a similar program in the Baldwin School District. He says he wants to see students be prepared for post-secondary opportunities.

At the elementary level, Simmons plans to develop a literacy program which will enable students to discover the joy of reading and to excel at it.

Simmons is also looking at families as a whole, as part of the educational success process. He wants the district to work with community partners and social agencies to ensure families have the resources they need, as well. There are opportunities for the general public to step up and lend a hand also. Simmons encourages anyone who has the time to call the district and find out how they can help out in the schools, with the students, or with the families.

Simmons would also like parents to become more engaged with the school their child attends. Plans are in the works to meet with parents in the district and let them know there is room for them also, as volunteers and active participants in the school. Of the relationship between educators and parents, Simmons add, "We want to break down those barriers and say, 'We're here to help.'"

As for a vision for this school district, Simmons says, "I would say that, as far as I'm concerned, that I'm 100 percent committed to making sure that the students and their families have all the opportunities that they need to be successful beyond high school."

To find out more about getting involved, go to the district's website at http://www.westwoodschools.net.