In order for an elected official to know how to best fulfill their job, he or she needs to get in touch with the constituents they were elected to serve. Inkster Mayor Byron Nolen knows this first hand. Elected to the office in 2015, Nolen began his mayor's term with a basic maxim: if you want to know something, just ask.

"It's hard to communicate with the citizens," says Opal Nolen, the mayor's mother. "My son wanted to let the citizens know what he was doing, and wanted to know what they wanted him to do, so he decided to meet with them once a month so evemonthly event called Lunch With the Mayor.

The monthly event is held at the Booker Dozier Recreation Center on Middlebelt Road in Inkster. Of the mayor's efforts to be in touch with the residents, Inkster resident Juanita Davis says, "It shows he does have a caring heart." Besides being an ideal method of communication between citizens and local government, the event also satisfies a social component, as well. This past November 15, nearly sixty people were in attendance, many coming to visit with neighbors and hear what the mayor had to say. The menu consisted of turkey, dressing, cranberry sauce, vegetables and sweet potato pie. The atmosphere was like an additional Thanksgiving celebration, with the mayor urging guests to go grab second helpings of turkey and dressing. "I usually come every month," says Inkster resident Rosie Moton. "I think it's a grand thing that he does, just having a luncheon for the citizens of Inkster."

The luncheon is organized each month by Opal Nolen, along with a group of ladies who enjoy assisting in the kitchen. Nolen adds that it is not really a challenge to put each luncheon menu together. "I've gotten used to cooking for large crowds," she says. "It gives me pleasure to do it." 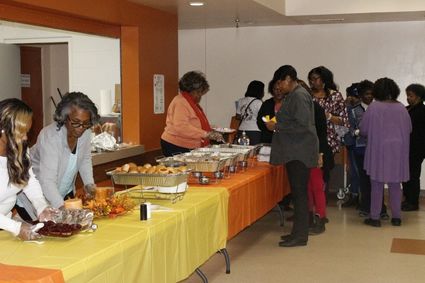 In addition to a delicious lunch, the informal format of the event allows residents to ask questions of the mayor and any city council members in attendance regarding issues which are important to them. This past month the discussion included street repairs throughout the city, also known as a capital improvement plan. Mayor Nolen also urged residents to get in touch with the incoming representatives in both Lansing and Washington, D.C. City Councilwoman Sandra Watley discussed issues related to health and auto insurance and took note of residents' concerns over each.

"I've lived in Inkster all my 83 years," says Moton, "and this is the first time that a mayor has done this in Inkster." She adds that she thinks the efforts by Nolen indicate his insistence that his job be done well.