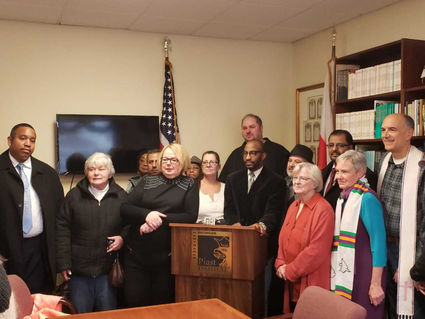 Climate change is not just a theory, it's as real as the air we breathe. Even though twenty percent of America's freshwater belongs to Michigan, the state's water emergencies aren't treated with the delicacy it deserves. Can we ever forget Flint, and how it's been suffering a legendary water crisis for about five years? Of course not, there are people still suffering today.

The next climate challenge

Michigan is facing is fracking. Fracking is defined by Google as the process of injecting liquid at high pressure into subterranean rocks, boreholes, so as to force open existing fissures and extract oil or gas.

The bill came across Governor Snyder's desk on December 18, 2018. It is asking for permission to dump nuclear waste in Michigan's fresh waters. Specifically in densely populated areas of Hamtramck. This has raised the attention of many eco friendly groups across the state. State Rep- Elect Isaac Robinson and Rev. David Bullock are two of the persons leading the charge to prevent this from happening.

ask. States like Vermont and Pennsylvania have strict anti fracking laws in place to prevent the worst from happening. Why is an option even available to spoil Michigan's natural resources, and put citizens at harm?

Your guess is as good

as mine. It's was difficult to reach Snyder's office by phone before the end of the year, so many people reached out on Twitter and Facebook.

However at the last minute Governor Synder approved the bills on December 28, 2018 at 6:47 PM.

Don't be discouraged. Stay engaged and continue to let your voices be heard.