An All Inclusive Affair 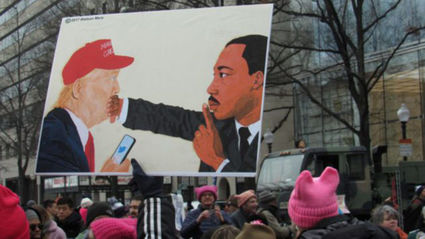 The group was diverse, representing many demographics, ages and nationalities.

The march started around 11 a.m. near Freedom Plaza, 1455 Pennsylvania Ave NW, and wrapped back around to the original location and site of the rally. The march, "Rise Up, #womenswave" built steam as it went on, with crowds swelling once they reached the main stage. This event was part of several marches held across the U.S.

The women's movement is a complex push for changes in policy. The group organization put forth a 72 page agenda. According to their official document:

"We believe the Women's Agenda is the first intersectional feminist policy platform. Women's March convened a group of 70 movement leaders to create this set of 24 essential federal policy priorities that form the foundation of the 2019 Women's March on Washington and will establish the priorities of our movement over the next two years."

The root of the movement is based in intersectionality, which the agenda describes:

"Intersectionality is a way to describe the experiences of identity that cross lines of gender, such as race, class, ability and sexual orientation, and come together to impact one's experiences of moving through the world. The concept originates in Black feminist theory and the word itself was coined by Dr. Kimberlé Williams Crenshaw to describe the ways that Black women are uniquely impacted by discrimination in the workplace, the criminal justice system, education and more. Today, we advocate for an expansive understanding of intersectionality when we fight for social and policy change."

The movement wants to create policies and legislation that address ending violence against Women & Femmes, Reproductive Rights and justice, LGBTQIA Rights, Immigrant rights, Civil Rights and liberties, among many other items.

The lineup of speakers was representative of the intersectionality that the organization's agenda described. Romper.com reported a full list of speakers.

One of the highlights of the march and rally was the imaginative posters and protest signs depicting everything from an illustration of Martin Luther King, Jr. silencing a tweeting President Trump to a man carrying a sign that read: "Build Blasey-Ford Tough" paying homage to Dr. Christine Blasey Ford who testified during the Brett Kavanaugh confirmation hearings.

For Alyzsha Negron, a Virginia resident, attending the march was personal.

Negron said she is hopeful the new energy and legislators in office might help bring a change.

"As long as we let oppressors oppress us it won't make a difference," Negron said. "So as long as we stand together with the new faces we'll be fine."

Lyn Walker from Pennsylvania, walked along the the perimeter of the stage. She said that her need to attend was nonnegotiable.

"I had to be apart and show the government that we do care about they way their talking about women, the way they're treating us, and how we need to be apart of the administration as well," Walker told the AFRO.

The experience was powerful for Walker who added, "It feels good to see so many women that I didn't realize felt the same way, that they want a government that understands their point of view."

There was controversy prior to the march as some members of the founding organization accuses other organizers of anti-semitism. During the day, inclusion was the focal point.

Patricia Thomas, Tee Ford Ahmed and a woman who asked to be identified as Amoriya traveled all the way from Athens, Ohio to attend the march. The women were excited as soon as they got to the crowds.

And although they all came with hopes for the future, they were all united to keep the momentum of the march going when they returned home.

"We already have a sister march in our hometown," Thomas said. "We'll go home and keep it rolling."

This article originally appeared in The Afro.