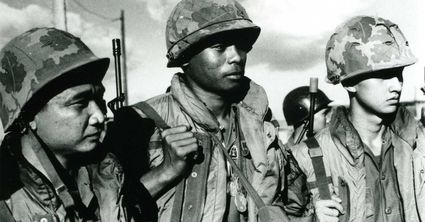 The Vietnam war spanned years of global conflict. Each party viewed the war, and other parties involved with different lenses. But most veterans, historians, and civilians claim the war ended with no positive payback for what was sacrificed.

American military involvement seems to be taboo information and swept under the rug. Depictions of Vietnam has been a popular topic amongst Hollywood films and pop culture. But even with the war's limelight and controversy; Studies come out that yearly expose the conditions veterans faced overseas and when they stepped on home soil.

Family backgrounds, lifestyles, and reasoning for each soldier participating in the war were different. Americans rarely returned home to the same variables. Those who were accepted with open arms, or accepted their new way of living adjusted well. Soldiers who were met with criticism and backlash had trouble turning back into society. A handful went back to serve another tour due to stress from home.

The youngest American Vietnam veteran is reported to be about sixty years old. With age comes issues and new factors to your everyday health. Fragility, arthritis, glaucoma, and dementia are common happenings of aging. General military experience stems a separate bracket of affairs, often it sped up the aging process. Combat experience, and even times served proximity to combat offer a horrific set of problems.

Post traumatic stress disorder, insomnia, night terrors, dismemberment, and numerous spectrums of mental illness plague those with combat experience. Some are afraid of the dark, others have violent and dreadful flashbacks of their past. A number of men and women have used drugs to cope with their Indochina experience, and unfortunately developed a habit and brought it to their civilian lifestyles.

As if you could compare tragedies; Americans received incurable diseases from the handling of war chemicals like agent orange, trekking in the jungle's unknown.

Poor sleeping, and PTSD have been linked to Americans forty years after serving. Poor, or no sleep is linked to decaying bodily functions and depression. Most of the women in the Vietnam war were Army nurses who had more problems sleeping, but could function just as good without rest. Not all veterans have the medication or resources to keep their illness in check. These components become patterns of self destruction.

Programs and platforms are given to Vietnam veterans every year so their voices can be heard. Non profit organizations and research studies have been reaching far to give support to the veterans. Help is accepted with love but veterans say it's their job to keep a strong mind, and move on with life in the safest healthiest way possible. Even though the places they have seen, experiences felt, and friends lost will never be forgotten.