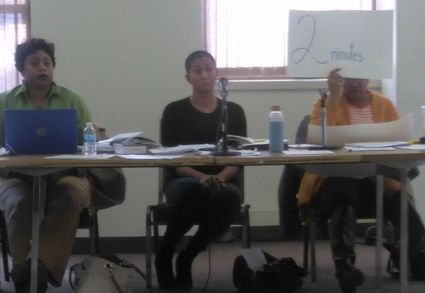 DETROIT - On Saturday January 26th, the newly elected Detroit Charter Revision Commissioners held their third community meeting at the Samaritan Center on the city's east side.

Detroiters voted last August to impanel a commission to revise the city's 2012 charter. If the vote had not passed, the opportunity wouldn't have come again for 16 years.

The Charter Commission is in a very important and critical period because it is involved in the process of making changes in the city's charter, a document which serves as the city's constitution and defines how city government is structured and what its power and responsibilities entail. The revision of Detroit's Charter also has renewed relevance because it is occurring during a time when the Detroit City Council is considering changes to the city's Community Benefits Ordinance Report which was published in 2018.

Saturday's Detroit Charter Commission public meeting, though controversial, seemed to run smoother than the previous one held on January 10th at the Northwest Activities Center.

There were disagreements among some commissioners regarding by-laws, and whether the minutes from the last meeting would be accepted into the record. This is understandable when members of different perspectives are brought together under public scrutiny to revise a document that will be able to steer the city's legal and political ship for many years to come.

The meeting was attended by a standing-room-only-crowd of concerned citizens, and the atmosphere was electric as some attendees voiced their displeasure of how the Roberts Rule of Order was not being properly followed, about commissioner Quincy Jones late arrival, and why only six out of nine of the commissioners were present.

Reportedly, out of the nine newly elected charter commission members, the four that are backed by corporate interests are Karrissa Holmes; Carol Weaver; Laura Hughes, and Quincy Jones. And those that are favored by grass roots community groups include Barbara Wynder; Nicole Small; Joanna Underwood, and Tracy Peters. Commissioner Richard Mack, who was endorsed by the Detroit News, won the ninth commissioner seat.

During the first half of the meeting the time was centered on confirming or rejecting commission by-laws, salaries for legal and executive appointees and payment for other hired positions, as well as calculations of the proposed budget. (Currently the Charter Commission does not have one).

Perhaps the most revealing and important part of the meeting was the second half when the public posed their concerns to the commission board members. This gave the citizens the opportunity to exchange information and to give recommendations for revisions in the charter which are to occur over about 90 meetings over a three-year period.

Commissioner Small received applause when she suggested that the commission hire someone other than the Livonia-based Citizen's Research Council to give an overview of the history and prior revisions of the Charter, and that a Detroit based firm be sought for the task. And Commissioner Underwood recommended that Detroit community groups be invited to give advice on Detroit's water issues so the commission would not be unduly influenced by corporate entities and government officials.

Les Little seemed to voice the perspective of many of those present. "It's awful to see people backstabbing us left and right; we must stop this," said Little.

Jerry Henderson weighed in by stating that the charter is only as good as its enforcement and there is usually little or no enforcement of the city's constitution. "We look and see things happening in our community, and we ask,' what happened?" said Henderson. "For instance, the bike lanes in our city. How did they get here? And who voted for them? Whatever happens in our city, the residents should have first say and also last say. Nothing should happen without us voicing our opinion on the matter."

Demeeko Williams, director of Hydrate Detroit, voiced his concern about revision in the charter related to Detroit's Water and Sewage Department. "We need to include language in the charter for a water affordability plan," said Williams. "We need to make sure that the charter ensures that all the people of Detroit's water rights are respected and protected."

Detroiter Kenneth Holloway addressed the meeting about the importance of maintaining accountability to the people. "We voted you in for the people," said Holloway. "Not for the mayor, or for the City Council, or for anyone else. So we want the commission to work for us, and not for them. I don't know how someone can run for public office on a platform to serve the people, and then change up when the big shots take you in the back room and make you bend over. This is sad. You should come out strong and remember that your ancestors took a beating so you can be here." 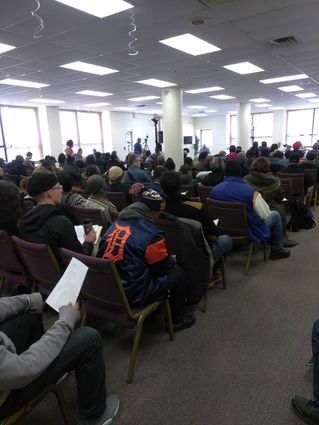 Lawrence Stokes, an iron worker, voiced his outrage that qualified Detroiters were not being hired for construction jobs they were legally entitled to. "We have billions of dollars coming into the city for new infrastructure, yet few of our residents are being hired even though 51 percent of these jobs are supposed to go to Detroiters," said Stokes. "It's tragic that we have Detroiters who are more than willing to work and who need these jobs but can't get them. I want to see something done about that because you can change people's lives and you can change the condition of this city, just by giving people a livable wage."

Gary Newsome of the Detroit People's Platform suggested that Detroiters monitor closely the charter's revision process and watch for preference for proposals from corporate interests. Be mindful of attempts to thwart the commission's independence. Beware of efforts to silence the voice of the community through paternalistic rules and sanctions; and demand transparency.