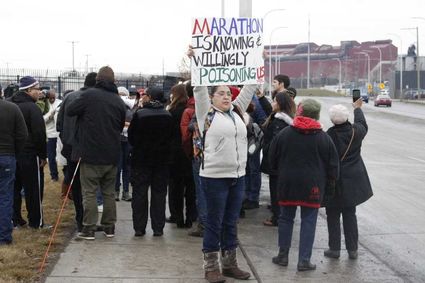 Michigan State Representative Cynthia A. Johnson lives nearly 10 miles from Marathon Petroleum's Detroit Refinery, but told a crowd of listeners at a rally on Monday that she was awakened by what she thought was a gas leak in her home in the early morning hours on Sunday, February 3. She says she became sick from the foul odor.

Johnson was not alone in her experience early Sunday morning. A malfunctioning flare at Marathon Petroleum's Detroit refinery, located in southwest Detroit, created a choking odor which permeated the air in metro Detroit early that morning. Residents in the neighborhoods surrounding the facility were awakened as well, some panicking and fearing the worst. Many complained they became physically ill and had difficulty breathing. The sources of the odor are suspected to be hydrogen sulfide and mercaptan, which is added to natural gas to give it a noticeable smell.

Monday afternoon's rally was organized by the group Michigan Environmental Justice Coalition (MEJC), and was held in front of Marathon Oil, 1001 Oakwood in Detroit. About 40 people braved the chilly rain, held signs and called for accountability on the part of Marathon. They voiced their concerns not so much at the release of the potentially toxic fumes, but rather the lack of response from cities, police departments, and even Marathon itself.

Residents complained there is no emergency system in place to alert residents in the event of a toxic situation involving the refinery. In addition, no emergency plan, including a plan for orderly evacuations, is currently in place in the neighborhoods surrounding the facility. Residents also say many in the community do not speak English and need Arabic and Spanish translation if a life-threatening event were to occur.

Marathon says it has an emergency alert system in place and asks residents to go to its website and check for updates. Residents say their community has limited access to the internet and that Marathon ought to do more to alert residents in an emergency.

State Representative Tyrone Carter says that Marathon sent out alerts to some residents, however everyone did not receive them. 'There needs to be a better communication plan between Marathon, local city officials and the residents. We have been asking for an evacuation plan for years. The citizens need to know what to do in case of an emergency at Marathon or any of the other industrial plants in the area."

Local air quality in the area is also at the heart of the issue. Dearborn City Councilmember, Leslie Herrick attended Monday's rally, and told the crowd that she grew up a mile away from the refinery and now as an adult, suffers with asthma. She added that many children residing in the area, including south Dearborn, suffer with childhood asthma and that inhalers and nebulizers are a normal part of everyday life. Herrick promised to do whatever she could at the city level, working with large corporations and the environmental issues they cause, but added, "first and foremost is the quality of life of everybody here."

U.S. Congresswoman Rashida Tlaib attended the rally also. She said Marathon had violated residents' right to breathe clean air. "We got sick, we couldn't walk out of our homes, we couldn't breathe clean air..." said Tlaib, who represents the 13th Congressional District. "People were scared, they were really scared yesterday and that is not fair to our residents, and we have to speak up and continue to hold them accountable," she told the crowd. "We have a right to know what we're breathing." 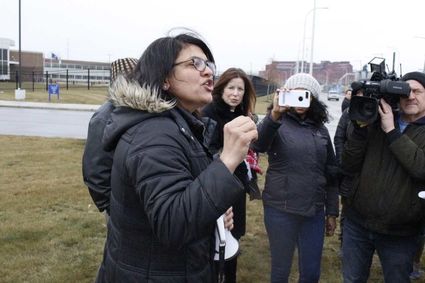 "Residents of south Dearborn were self-evacuating; their children were reporting vomiting in the middle of the night. There's nothing more scary for a parent than not knowing what's going on," said Michelle Martinez with MEJC, of the emission of the foul odor early Sunday. "It just caused a panic in the community and we really want our government to respond in a way that's going to help us learn from this," she added. "We need an emergency preparedness plan and we don't have one."

State and city officials, including the Michigan Department of Environmental Quality, insisted dangerous levels of any substance in the air have not been detected and maintain that residents were not in any danger from the foul odor emitted over the weekend. Marathon says it is working to repair the faulty flare system.

For further information or to report concerns, contact the Michigan Department of Environmental Quality at 1-800-292-4706.