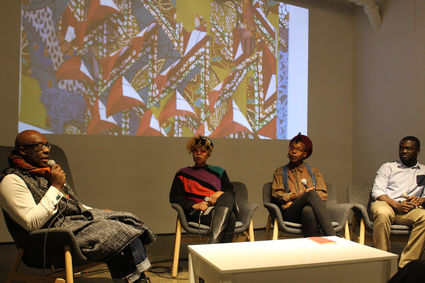 Three times a year, Red Bull Arts Detroit host an art residency. In which three different artists inhabit the same space to create work for a larger showcase. The Viewfinder Series puts the artists in a panel discussion to introduce themselves, and how their perspective influences the art. Viewfinder Series talks can cover a horizon of topics; the inaugural talk was moderated by scholar-teacher, Michael Stone-Richards to discuss the relationship between identity and place.

The topic at hand, is just as diverse as the artist there to discuss it. Multi-disciplinary artist Miatta Kawinzi was raised in New York. To a Liberian mother and Kenyan father. Tiff Massey an interdisciplinary artist and proud Detroit native, has worked her art in places like France and Greece. Ghanaian born artist Patrick Quarm, spent his life in the Motherlands before enrolling at Texas Tech University.

Each artist provided a different answer in regards to relationships between identity and place. But the main idea was shared and simple. Miatta, Tiff, and Patrick wanted to combat the negative narratives and ill experiences associated with their home place and upbringings.

Tiff is fed up with the gentrification of Detroit. She says to Professor Richards, "Black people aren't new to Detroit!" The narrative in the city is shifting. As the narrative shifts, Tiffs history and foundation in Detroit is slowly peeled away with it.

Miatta talks the duality of not being an African American, but an African American. As a first generation American she's had to interact with two different cultures. But Miatta says with the help and understanding her parent's lineage, she was able to maintain a place of identity.

Patrick's thoughts are similar. His identity is a revolving chain depending on his location. In his home he is known as something, around the community he has another title, outside the country he is known as a Ghanaian. In America he is known as an African.