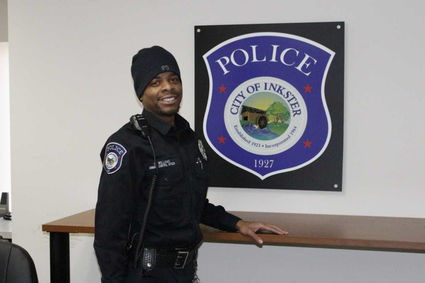 The city of Inkster is pleased to announce the arrival of D'Shawn Williams as the city's new Animal Control Officer. The city has been without an animal control officer since the retirement of Officer Ron Thomas in 2011. The position was not filled due to city budget restraints.

Following Thomas' retirement, regular patrol officers were assigned to handle issues with animals in the city. The city was short on resources and cases of vicious or loose-running dogs were handled by officers with no training in animal wrangling. Inkster Senior Code Officer Dawn Wall says, "They did the best they could, but a lot of times, things weren't followed up on." Wall adds that between 2015 and 2017, officers responded to 1,686 animal-related calls, including 54 animal bite cases.

Efforts to encourage residents to keep pets vaccinated and licensed fell by the wayside as well. Late last year, Wall says the department began readdressing the issue with residents, as it became apparent plans for a new animal control officer were in the works. Williams arrived in December and has been in training with Michigan Humane Society's Investigation and Rescue Unit. He has recently been assisting police officers when an animal call is received. This on-the-job training allows Williams to "Just see how they do it, and how I can do my job better when I'm fully up and running."

The city has plans for a new animal housing facility, having already secured a building. The facility will need much work, however, before it can be used for sheltering animals. Fundraising efforts are currently underway and the city has consulted an architect. "People have said they wanted this for a long time," says Wall. "Those people that wanted to volunteer and wanted to help-now is the time. " The building will need improvements made to its ventilation, plumbing, and electrical systems, in addition to structural upgrades. Additionally, the city is hoping a volunteer tradesman or two would be willing to help get the building ready for use.

Williams, a native of Los Angeles, came to Michigan three years ago. He says his training includes learning how to assess a situation, how to approach animals, and how to speak to people to educate residents about responsible pet ownership. "If I'm just taking everybody's dog, then I'm just filling up the shelter," he says. "Whereas, I can educate the community on how to take care of their dog and the dog stays home with their owner." Williams want the community to know that he's not here to be the bad

guy. "What I'm here to do is educate. If it comes to me taking the animal, then that means I've already worked with you," he says. "I've already educated you on the matter and you still did nothing."

Williams will also serve as part of the Ordinance Enforcement Department when not on patrol for animals. His training and certification to work as an animal control officer will be completed shortly. "I'm excited about the position and ready to get going," he says.

The community can find out more about the efforts to bring an animal shelter to Inkster via the city's Facebook page at http://www.facebook.com/CityofInksterOrdinanceEnforcement&AnimalControl. The page includes a link to make a donation. Checks can also be sent to the Inkster Police Department at 26279 Michigan Avenue, Inkster, MI, 48141. Mark the envelope "Attn: Animal Control" and write "Animal Control" in the memo section of your check as well. In addition to monetary donations, the department will need practical supplies such as leashes, blankets, paper towels, pet food, and cleaning products.

Both Wall and Williams urge residents to contact the police if they see animal abuse or neglect. Williams says, "Let's not work against each other-let's work together."