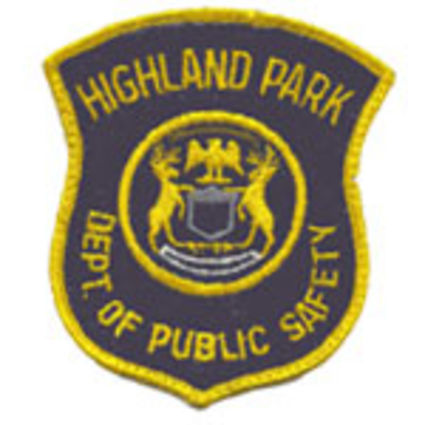 Highland Park is a small municipality completely enveloped by Detroit. According to the last census, it has a population of 11,776. And although home to Henry Ford's first mass production auto assembly plant, the city has lost thousands of industrial jobs with the downsizing and removal of auto manufacturing and related industries. (Chrysler corporation, the city's last and largest private employer, moved to Auburn Hills in the early 1990's).

Faced with corporate abandonment, loss of jobs, and a declining tax base; city services deteriorated, and crime and blight began to overtake the once thriving city. Moreover, Highland Park covers an area of only 3 square miles, and any overflow of criminal activity from surrounding Detroit has an acerbic effect.

Yet, crime statistics indicate that crime in Highland Park has been on the downturn since 2012. And this includes violent crimes as well as property crimes.

In 2012, the Secure Cities Partnership was established as a cooperative effort between selected cities in Michigan in conjunction with the Michigan State Police (MSP) to address high crime areas. Detectives from the MSP helped by participating in the Major Case Unit to investigate and/or prevent violent crimes including rape and homicide.

"Violent crime is positional, as in when two people have an issue that they can't solve so they resort to violence," said Highland Park Deputy Police Chief, James Tolbert in a recent interview. "Whereas property crime tends to effect the city. People want to be secure in their homes and not have them broken in to. Also vandalized and decaying property effect the image and the quality of life of the city. So, when property crime goes down, that's a clear indication that you're over the hump. Safety of the individual is paramount, but you also want to maintain the structure and integrity of the city by assuring the people's property is secure. We can't plan for people having disagreements that lead to violence, but we can plan to make people feel safe in their buildings and with the property they have."

Statistically the city is getting better at crime reduction in all the major categories, but there is still much work that needs to be done before crime is brought down to national average standards or even state-wide averages. And like many impoverished cities, Highland Park seems to be caught in an ironic circle, for in order to attract people and investments, the city must be perceived as a safe place to live, work, and to conduct business. Yet in order to reduce crime and be safe, the city must have financial investment and human resources.

"The Mayor is going through great pains to bring economic development here," said Tolbert. "He can speak for himself, but I know he's got some big plans. He's working on a 50-million-dollar project that's going to bring about 400 jobs to the city and he's got other things on the burner as well. Obviously, we need to increase the city's tax base and we do what we can to make the city more appealing. The Mayor wants to partner with businesses and bring in economic development that will enhance the value of the city of Highland Park."

It has been surmised that crime is fed, not only by economic deprivation but also by spiritual deficiencies and waywardness. Most crimes are committed by people who are relatively young; people from about 13 to 30 years of age. Many experts believe that when communities feel they are being policed by people who are familiar with their city because they live there, it results in better police-community relationships and improved policing. "I think it's important to know that we reach out to our young people," explained Tolbert. "Our rec-center is open, and it constantly has programs for the youth. Our police department is starting an Explorers Program where we will recruit 20 youth from ages 13 to 17 so we can get them to understand police culture because what we want are individuals from the community applying to the police department so we can develop homegrown talent as opposed to hiring people who are not from this community. We want to hire people who live in Highland Park."

According to Charles Lackey, the director of the Highland Park Police Integrity Unit, the city is also engaged in using cutting edge technology as a tool to deter crime. "We've instituted a real crime reporting system and incident management system," Lackey said. "We needed to be able to give our officers access to the information that they need. When I got here in 2014, the officers didn't even have computers in their patrol cars. Now, not only do we have computers, we have some of the best computers in the cars. The computers give the officers the instant information they need to more effectively do their jobs. And we are expanding on that. We have in-car camera systems. We have body cams for our officers, and we have tasers. And this year we're moving toward even more advancements."