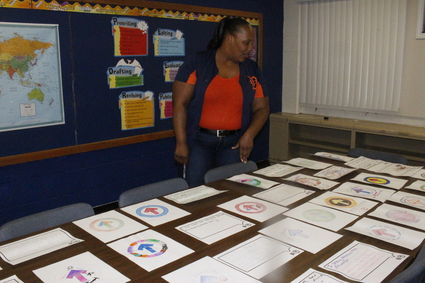 Event Coordinator Deborah Smith looks over the designs children decorated at Stand Up, Stand Out and Stay Sober

On April 4, the Family Resource Center (FRC) hosted a community event called Stand Up, Stand Out, and Stay Sober. The free event was held at the Maplewood Community Center in Garden City. The event was directed at families and young adults to highlight the dangers of underage drinking.

FRC Supervisor Kimberly Mitton-Hahn says the event was held at this time because April is Alcohol Awareness Month. "Over spring break we hold this event to help educate and bring awareness to the prevention of underage drinking," said Mitton-Hahn. "Our youth sometimes make poor choices."

FRC first hosted the event in 2013. Sean Hahn with FRC says, "We like to provide some opportunities in Garden City for alcohol-free fun for the families." Attendees were given "passport cards" which were signed by staff members as participants completed each activity. Five activities in all emphasized the seriousness of using alcohol. The events included those which simulated the numbness and loss of manual dexterity while under the influence of alcohol by attempting an activity requiring fine motor skills-but while wearing bulky oven mitts. Other activities simulated loss of depth perception and balance while participants wore Impairment Goggles. Participants attempted to navigate an imaginary vehicle on the road using a video game, and attempted to throw marshmallows at a target and pick them back up again.

"We've got some activities that make it fun to learn about that stuff, but then we break it down with a pretty serious conversation afterwards about why it's important to be careful," says Hahn. He added that while the Impairment Goggles are a useful educational tool, the lesson is that they can be removed when the fun activity is over; if one were genuinely intoxicated, that impairment is not so easily removed.

Other activities allowed participants to get creative. Share Your Story allowed attendees to express either their experience with alcohol or to pledge to be responsible. Youth had fun decorating a symbol called Above the Influence, signifying a pledge to stay sober.

Once all activities were completed, attendees entered their completed passport in a drawing for prizes.

The afternoon's activities included a free dinner. Attendance neared 80 participants. The lessons learned were certainly serious ones. What one lesson did Hahn hope attendees took away with them? He summed it up this way: "That you can have fun without drinking, without being drunk, without being impaired."

For more on events being held at the Maplewood Community Center see the center's website at http://www.gardencitymi.org/150/maplewood-community-center.