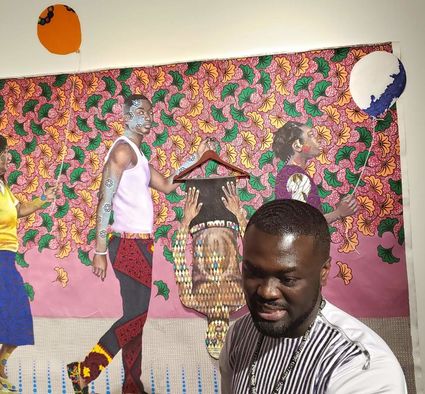 Patrick Quarm - Patrick's visionary tell of representation, would have not been possible without help from an outside source. The African print fabric was sent to him by his brother. Patrick used the fabric to create a project that details the complex evolution of the modern Africain. The fabric creation process does not fully take place in Africa. It starts in Indonesia and is then sent to Africa. The modern African, just like the fabric have dual identities and evolutions. Patrick used his skills to paint a clear link between the two.

On April 12th Detroit came out in a wide artistic lump to support the Artist Residents of Red Bull Detroit. The Artist Residency program is vital to Red Bull Arts Detroit's commitment to the needs of emerging and established artists. Artists are given the space, time, and resources necessary accomplish their art goals.

The time has finally come for Miatta Kawinzi, Tiff Massey, and Patrick Quarm to display to the masses what they've spent their time on. Each artist differ in background, culture, and style. Resulting in three highly personal art experiences set in the space at one time.

New York based Miatta Kawinzi is a filmmaker and multi-disciplinary artist known for creating sculptural, sound, and video installations on the themes of selfhood, diaspora, and belonging. Kawinzi's work has been exhibited at institutions such as BRIC, A.I.R. Gallery, and Anthology Film Archives, as well as the Studio Museum in Harlem, New York; Aljira Center for Contemporary Art, New Jersey; and the FNB Joburg Art Fair, South Africa.

Detroit interdisciplinary artist, Tiff Massey holds an MFA in metalsmithing from Cranbrook Academy of Art. Her work, inspired by African standards of economic vitality, includes both large-scale and wearable sculptures and jewelry. Massey counts the iconic material culture of 1980s hip-hop as a major influence in her work, and uses contemporary observances of class and race through the lens of an African diaspora and life in Detroit. Massey is a 2015 Kresge Arts in Detroit Fellowship awardee, as well as a John S. and James L. Knight Foundation's Knight Arts Challenge winner and a Michigan Chronicle 40 Under 40 award recipient. 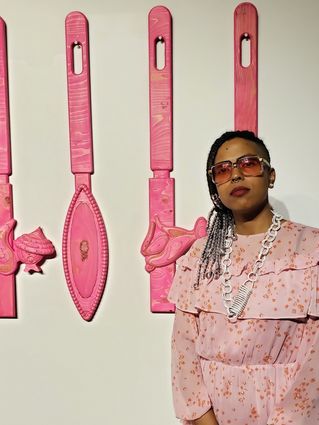 Tiff Massey - Tiff's project was on hair, and what it means to the black woman. The artist says hair is one of the first ways a black girl can adorn and appreciate herself. Tiff has had experiences where strangers have asked to touch her hair, moments she did not enjoy. One of her goals is for outsiders to understand how hair is linked to identity and culture. Massey's set included the barrett sculptures, a set of hairstyles which she did herself with help of her stylist, and a neon sign with language I'm sure my editor won't let me include in the paper. But the strong language fuels Tiff's feelings and artistic drive.

Patrick Quarm graduated from Kwame Nkrumah University of Science and Technology, Ghana with a BFA in painting, and a MFA from Texas Tech University. Quarm's work investigates the intersection of his identity both as an African and as an American, through representational portraiture, complex pattern

work, and textiles that are rich with color and cultural complexity. Quarm's use of oil paint and collage on fabric gives his work a three-dimensional, layered effect that lends movement beyond the two dimensional surface.

Miatta Kawinzi - Miatta produced a short on barriers, duality, and freedom. The film featured mysterious, thought provoking locations, nature, and Miatta vibing out and feeling the space provided. Miatta explored evolution and entanglement. She built a net that sat in front of the projector. Almost sucking the audience inside the screen, forcing them to become a part of the show. Miatta captured, and edited all of the film herself. except the nature segment which was captured in upstate New York.

I appreciate Miatta, Tiff, Patrick, and the team at Red Bull Arts Detroit for inviting me. The artist's exhibits are on display until June second of this year. Check out the once in a lifetime show before it moves out of your backyard.