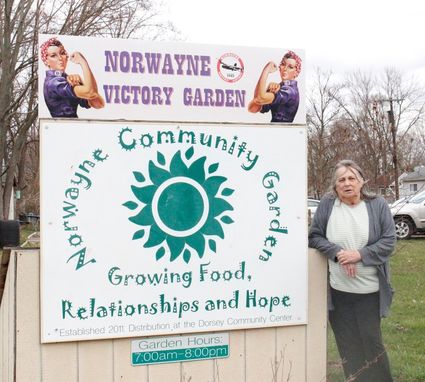 Community gardens have been popping up all over America, especially in urban neighborhoods, in an effort to alleviate food scarcity. Often, such neighborhoods are considered "food deserts," where residents are mainly low-income and lacking in access to nutritious, fresh produce, relying instead on either fast food or highly processed food from convenience stores.

In Westland's Norwayne Subdivision, a community garden has been quietly providing for neighbors at the corner of Dorsey and Newago Streets. The garden was established in 2011 and is under the auspice of the Norwayne Community Citizens Council (NCCC).

Norwayne resident Judy McKinney has been organizing the garden for the past four years. McKinney says she does not ask for financing from the NCCC, rather she gets creative in how she manages resources. Compost for the garden comes from the city's sanitation and compost service, free of charge. McKinney says Westland City Councilman Peter Herzberg has been a big help in obtaining seeds and plants. A nearby garden center is generous enough to offer discounted merchandise, as the garden is for the benefit of the neighborhood. In addition, McKinney saves seeds from each year's harvest and stores them for the following year. "I think a garden like this should be pretty self-sufficient," McKinney says. The garden's tremendous water bill is handled by the WCCC.

Each year, neighborhood residents help themselves to green beans, peppers, tomatoes, peas, and more. But while many are pleased to avail themselves of the garden's harvest, far fewer are willing to help with the necessary work which goes in to producing a successful bounty. McKinney becomes frustrated with the lack of assistance and cooperation she receives in tending the garden each year. Neighbors claim that because it is a community garden, they can help themselves to what's available. While that fact is true enough, McKinney emphasizes the word, Community. "That mean everybody working together," she says.

As a child, McKinney enjoyed gardening. "When I was a kid, I raised strawberries," she says.

McKinney says she has had volunteers from local social organizations and community groups, along with a team of young men from the Norwayne Boxing Gym, located three blocks away at the Jefferson Barns Community Center. A few others have come from the other side of the city, and even other cities to help out. The only gardeners missing are those from the Norwayne subdivision.

The garden sits on two vacant lots, the homes having been torn down long ago. A small tool shed and three large rain barrels are also part of the project. The area lacks any sort of secure fencing or border, making the garden a target for youth vandalism.

Despite the challenges, McKinney is optimistic about the upcoming year. A new fence courtesy of the city will be installed this spring. A good amount of spring cleanup is already accomplished. Fruit is being added to the garden this year. McKinney says raspberry and blueberry plants will be planted shortly, and grape vines are already in the ground. The only thing really needed now is volunteers willing to work. "People need to understand that it's there for the community, but you have to participate. A little, not much, just a little," she says. "If everybody that went in there pulled a few weeds, we wouldn't have a problem."