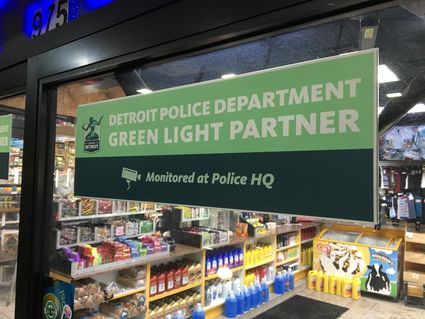 In his State of the City speech last March, Mayor Mike Duggan promised to install more surveillance cameras throughout Detroit. This is in conjunction with the city's controversial Green Light Project, a 2016 high-tech camera surveillance initiative which has expanded to include over 500 monitoring devices throughout the city. It was also recently revealed that many of these cameras are outfitted with sophisticated facial recognition technology which is a point of contention among residents.

Moreover, in 2014, Duggan announced his plan to install video surveillance cameras on Detroit Department of Transportation busses to give police advanced monitoring powers so they can identify criminals and reduce crime.

Monitoring devises that have facial recognition capabilities are perceived as egregious, intrusive, and illegal with many people convinced that they are the precursor to a totalitarian police state far more pervasive and controlling than that portrayed in George Orwell's classic novel, 1984.

Last month, San Francisco (one of the most liberal cities in America and a center of technological advances) banned the use of facial recognition technology software by police and other authorities. "I think by San Francisco being the headquarters for technology, also comes with it a responsibility," said Aaron Peskin, city supervisor and sponsor of the bill. "We have a responsibility to regulate the excesses of technology precisely because they are headquartered here."

There are also legal bans under consideration in Oakland California, as well as in Somerville Massachusetts. And a bill introduced in Washington D.C. seeks to ban users of commercial face recognition devises from collecting data to monitor consumer habits without their permission. The bill falls short, however, of banning government use of the devises and the software.

Many believe that high-tech surveillance cameras are a flagrant violation of the Fourth and Fourteenth Amendments to the Constitution which confirm the right of people to be secure in their homes, papers, effects, and protects their persons from unreasonable searches and seizures.

Some approved of the monitoring, believing it would keep them safe from criminal elements, yet others expressed their belief that electronic surveillance does not reduce crime and that its use is taking the nation down the slippery slope that leads to total government control, repression, and abuse.

"I'm opposed to facial recognition technology because the city council put it in the budget without any policy guidelines," said Detroit charter commissioner, JoAnna Underwood. "How can you approve something when you don't have a set policy for it?"

A common theme among supporters was that if you aren't doing anything wrong, you shouldn't mind being monitored, but Scott Bowden disagreed. "The core premise of fascism is that if you believe in privacy you must be doing something wrong," Bowden said. "But I do not want to live in a society where we are tracked by our faces. And a society that trades liberty for security deserves neither."

The development and installation of facial recognition technology is becoming a hot button issue in Detroit and across the nation with supporters emphasizing the need for public safety, and opponents citing privacy and personal freedom.

"Today's surveillance camera is not merely the equivalent of a pair of eyes," explains a study conducted by the New York Civil Liberties Union. "It has super- human vision. It has the capacity to zoom in and read the pages of the book you have opened. And facial recognition software can capture your image from the faces in a crowd and compare it against pictures stored in a government database."

Currently, Detroit and Chicago are the only cities in the nation using surveillance cameras equipped with facial recognition software which operate in real time. According to local journalist Steve Neavling:

"It's also a deterrent," said Pastor Maurice Hardwick. "It makes them think twice before committing a crime."