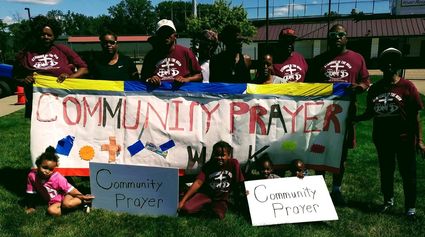 The streets of River Rouge city was flowing with love and appreciation on this past Saturday as they continue to come together and believing that things will get better. When you have people approaching you for prayer with tears running down their faces and trusting that you can get a prayer through for them it speaks volume. There were young men and women touching and agreeing, praying for the people as well as 9 year old LaDreme Stinson seeing her friends on the street and began to pray with them. Although she didn't know how they were going to perceive her at first. When it comes to helping and encouraging someone it does not take many. The bible says in Matthew 18:20 For where two or three are gathered in my name, there am I among them." So you don't need a whole slew of people but true believers and if you can just touch one soul, God is pleased. Even though things went great, there were a few concerns that bothered me! For River Rouge, Ecorse and maybe some other communities to have so many churches nearly on every corner there is not enough dealings in the communities and no power exhibited. You are strong inside the walls, but to the outside you are seen as weak. If you are not part of the solution, than you are part of the problem. If the churches worked together these cities would be so powerful and unified. I do believe there would be different outcomes in our communities. Even if you don't live in the community but you are a leader in your church such as a Pastor or Overseer you still have a responsibility to that community. With so much violence and things going on, you should care about your congregation, your flock, seeing that a lot of them reside in the community. It seems as if every church is only concerned about what goes on in the four walls of their church and not the matter at large which is all God's people, reaching out to a dying world of lost souls , broken hearts and spiritual cries. Summer is almost over and our children are about to return to school and when we send our children to school we are subjecting them to many things and one being bullying. Those that we entrust to our children are the teachers. I do understand that there are people with different beliefs may have a different interest when it comes to religion, but those of faith knows what prayer can do and that they shouldn't be afraid to show it. And if you have a deep concern for the children, their welfare and not only for sports reasons! They can be productive and groomed in every area of their lives. The youth need to see that their teachers care for them and not think of their jobs as just being a job. There also needs to be some connection to the officers to bring back the notion that officers are there to help, serve and protect, not just in bad times when something is wrong but to encourage them and show that they care. What really triggered an eye opener is at the time of election you see every official and those that are running for positions in the world out, making their faces visual at all cost. We have the hopefuls visiting churches, schools, standing on the corners, going to people houses anywhere that would help them to a get a vote. I'm not trying to be mean or anything, but I love my city and I love people and believe that things could be better. So I am making reference of how I see things and what raises an eyebrow for me. There was not one City Council member, not one School Board member, not one City Official in site at the Community Prayer Walk. Where is your concern for the community? We should not only see you during election time. We should be more concerned about what's going on in our communities all the time and not sometimes. We should be optimistic and not let our minds be crowded with the anticipation that nothing is going to change, so you just let whatever happens happen. You see what that way of thinking got us and what happened in the last Presidential Election. So let's be united in love, peace and hope. If we all work together a change can come. 2 Corinthians 5: 7 says that, "For we walk by faith and not by sight. May God bless our communities entirely