DETROIT - Detroit is known as one of the most poverty stricken large urban areas in the United States. And according to the 2000 U.S. Census, Detroit has the highest percentage of Black people in cities with a population of 100,000 or more.

The racial fears and hatreds which culminated in defacto and dejure segregation and redlining has its genesis in the institution of chattel slavery which was legal in the U.S. for most of its history. In the first three decades of the 20 th century, Blacks traveled to Detroit by the thousands as part of the Great Migration. When they arrived they faced new forms of discrimination and oppression that was more sophisticated but often just as

devastating as the kind they fled in the South.

Civil rights icon, Rosa Parks, discovered this after she moved to Detroit shortly after the Montgomery bus boycott that she sparked in 1955 when she refused to give up her seat to a White passenger. Parks initially lived with her brother in a small wood- frame house on Deacon street in a segregated area of

"The unsung story behind the Rosa Parks house is one of redlining, housing inequality, and its persistent effects on millions of Americans today, "said Ryan Mendoza, a Berlin based artist who purchased the house and shipped it to Germany to be restored. "From Brooklyn to Oakland with pen in hand, city planners mapped out where Blacks would live."

In 1932 the Federal Home Loan Bank Act (FHLB) was enacted to stimulate home sales, and a series of so-called residency security maps were used by the Federal Housing Administration (FHA) and the Home Owners Loan Corporation (HOLC) to indicate what areas in the nation were high risks for home loans. These maps were often marked in red according to racial demographics and Detroit as well as many other cities throughout the nation were "redlined" a process of systematic denial of services and investments such as home loans (or

through the raising of prices of houses) to residents of usually Black neighborhoods and communities. This policy was so pervasive that it has lasted, in one form or another, until today. "Without our government's purposeful imposition of racial segregation, the other causes-private prejudice, white flight, real estate steering, bank redlining, income differences, and self-segregation still would have existed but with far less

opportunity for expression," writes historian, Richard Rothstein in his revealing book, The Color Law. "Residential racial segregation by state action is a violation of our Constitution and its Bill of Rights. The Fifth, Thirteenth and Fourteenth

Amendments prohibit the states or their local governments, from treating people either unfairly or unequally."

Another form of redlining is the imposition of what experts say are unlawful foreclosures on Detroit residents. Detroit reportedly has one of the highest rates of property tax foreclosures since the Great Depression. Many of these homes and retail properties have been foreclosed on then re-sold to white owned corporate entities or well-to-do private homeowners.

Michigan's Constitution demands that a property assessed for taxes cannot exceed 50 percent of its market value. Studies show that the assessors in Detroit are egregiously violating this important constitutional provision. This has resulted in about one in four Detroit homes being foreclosed on in the years 2011 thru 2015. (16 thousand Detroit properties have been foreclosed since April of 2019).

"The property tax assessments were not only above the legal limit, but they exceeded it by a substantial sum," said Law Professor, Bernadette Atuahene. "In 2010 assessments were on average 7.3 times higher than the legal limit. In 2015 they were 2.1 times higher. In all the years studied, the illegality was most pronounced for lower valued properties. That is, the city is more likely to assess modest homes at illegal levels than it is

more expensive homes, leaving the most vulnerable homeowners drowning in injustice." (A 1973 study of 10 large cities by the federal government found gross and persistent over assessment of property taxes in low-income African American communities).

Out of approximately 3,500 sales of Detroit homes in 2014, only 462 received mortgages. Thus, 87 percent of sales were made with cash. This effectively marginalizes Black and poor people and is another form of redlining in a city that is (at least) 80 percent African American with a poverty rate of 37.9 percent.

The Community Reinvestment Act was enacted in 1977 to impede discrimination that resulted in redlining, and to encourage banks and other federally insured financial institutions to extend credit and loans to low and medium income residents in communities were the banks operated. These districts were defined as Metropolitan Statistical Areas (MSAs). However, in Detroit the CRA is undermined by forming a multiple-city area designation. Detroit's MSA includes suburban cities outside its borders. This allows banks to make loans in Warren, Dearborn, Troy, Livonia and Farmington Hills and still comply with the Community Reinvestment Act. "We have created a caste in this country," writes Rothstein. "African Americans are kept exploited and geographically separate by racially explicit government policies. Although most of these policies are now off the books, they have never been remedied and their effects endure." 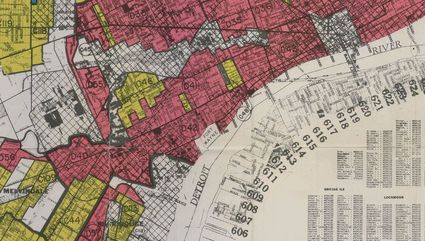