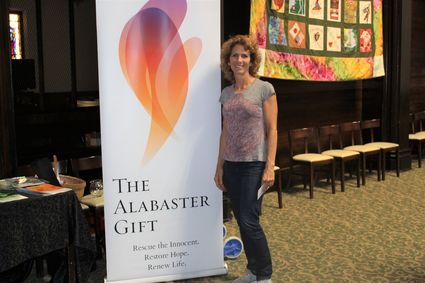 A bra and panties lay on the sidewalk near Fort Street Presbyterian Church. To any passerby, it would likely not have significant meaning other than to cause one to look the other direction. But to a young woman known only as Liz, it was a sight that stimulated her emotions. "To me, I see human pain in that," said Liz. "I see what happened to this woman." Liz is a survivor of human trafficking.

Fort Street Presbyterian Church was the location for an awareness seminar on human trafficking on Saturday September 21. The seminar was hosted by the church's ministry to the homeless and needy, The Open Door, and facilitated by The Alabaster Gift.Liz was a guest speaker, telling of her experiences.

The Alabaster Gift (TAG) is a faith-based organization in Macomb County which seeks to nurture and support women who are currently or have previously been involved in human trafficking. The organization is a drop-in center which provides resources by partnering with other social organizations. They also teach life skills, and help with finding employment and safe housing.

Heidi Wilt, Executive Director at The Alabaster Gift says of human trafficking, "It's happening everywhere, right under our noses. Most of the time we're missing it because we don't know what to look for." It is for that purpose The Alabaster Gift presents seminars in schools, colleges, churches, and community groups to raise awareness about what human trafficking is and isn't, and what it looks like. Wilt says it is the second largest criminal industry in the world.

The National Human Trafficking Hotline received 1,038 contacts in 2018 from victims in Michigan alone. Those contacts were either phone calls, e-mails, texts, or online chats.

In many peoples' minds, human trafficking resembles a Hollywood film, such as Taken starring actor Liam Neeson. But Wilt says abduction accounts for only 3 percent of human trafficking cases; 35 percent of cases are familial, wherein a person sells their own family members, and 62 percent are relational, in which recruiters strike up a relationship with a potential victim. The recruiter could be a boyfriend, employer or talent agent who provides something of value, perhaps a place to stay or drugs or alcohol, then preys on the victim's feeling of indebtedness.

The event's guest speaker, Liz, was trafficked for nearly two years. A heroin addict, she was recruited by a sex trafficker when she found herself homeless following the arrest of the man she had previously been residing with. "He supplied me with drugs immediately and that gift was the gift that almost sealed my debt," she said, explaining that the trafficker now used her indebtedness to him to force her to become a prostitute. The pimp was eventually apprehended by federal authorities, freeing Liz to find a new life. "The most painful experiences of my life have been times where I felt like I had absolutely no value," she said. "It's really a great feeling to know that when I'm at TAG, I'm with people who are just like me, because that really doesn't happen anywhere else; I don't feel judged." She praised the efforts of Wilt and her team of volunteers with helping to restore her trust in people.

"I'm lucky; I'm one of the few fortunate ones that's still standing," she added. "I do hope to use the rest of my life to advocate for those who can't do it themselves."

Trish Hubbell, Director of The Open Door Ministry, said they wanted to bring awareness to the issue, providing a venue for The Alabaster Gift to present a seminar. "We have a soup kitchen that we run here, and sometimes we'll see some suspicious activity," said Hubbell. "Nothing that we can really put our finger on, but sort of this gut instinct that something seems off about it."

"I thought they did an outstanding job," Hubbell said of the seminar. "It's just so sad, it just really makes me want to do more."

The Alabaster Gift is always looking for volunteers.

To find out more, go to http://www.thealabastergift.org.