Are people born Activists? Or is it a learned behavior? 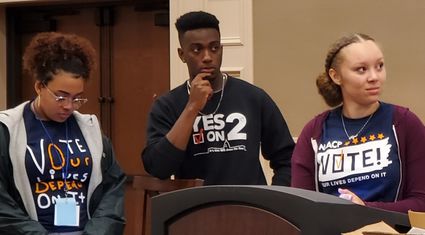 I watched a group of young people at the Annual NAACP State Convention this past weekend and I began to ponder the question, why are they activist? Were they born with the Activist gene or did they become activist because of the associations that they have had. After thinking about it on the ride home from Saginaw, I decided that it is probably a combination of both.

I watched the young people stand and speak so eloquently about things that they want to change in their communities and in the colleges and schools that they attend. They spoke about fighting for police to see them as people, spoke about using their voice at community meetings and about their excitement to be able to vote in the next election. What these groups of young people had in common was that they have been participating in training sessions and workshops over the last two to three years. But what they also had in common was that the majority of them had parents or siblings that were also activist. Bingo!!!

So many times we have conversations about the Generational Curse. That is family traits that are being passed down from grandparents to parents to children and then to grandchildren. Guess what – Generational Curses are not always negative. Many of these young people have the activism bug deep down in their sole. They couldn't stop being an activist even if they tried. It is in them; just like it is in me and many others.

I may not have been born an Activist, but it was put in me by the organizations that my parents had me involved in, the conversations that I had with my grandparents and family members and the truth that was also told to me. "You are either part of the solution or part of the problem." I saw me in those young people this weekend. I wish I could bottle up that energy that I witnessed this weekend and give it to all of the youth that I encounter. So since I can't do that, I pledged to myself that I will do better to live the life of an activist so that others will witness my passion so that they will want to learn more.

It is never to late to become an activist. If it wasn't passed down from your family to you, find a person or group who is making a difference in your community and learn from them. Then pass on what you learned to your children and your children's friends.

Nelson Mandela said, " What counts in life is not the mere fact that we lived. It is the difference we have made to the lives of others that will determine the significance of the life we lead."