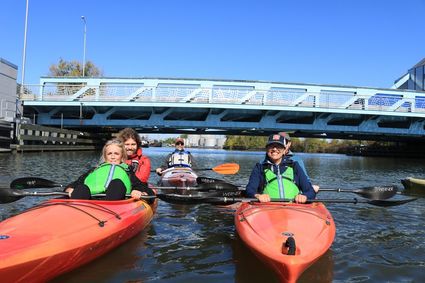 Congresswomen Dingell and Congresswoman Rashida Tlaib along the Rouge River

MELVINDALE, MI – Today, Congresswoman Debbie Dingell (MI-12) and Congresswoman Rashida Tlaib (MI-13) kayaked the Rouge River to highlight environmental cleanup of the river since it first caught fire 50 years ago. The kayaking began at the Melvindale Civic Arena and finished at Belanger Park in River Rouge.

The representatives passed through both of their Congressional Districts and the Ford Rouge Plant, AK Steel, Marathon Oil, and Great Lakes Steel. Both representatives were amazed at the wildlife, including painted turtles, eagles, herrings, loons, geese, ducks, frogs, and a myriad of other species.

"The Rouge River fire was a turning point in the environmental history of the U.S. After the fire, some got serious, rolled up their sleeves, knew it was right and began a very long process of cleaning up decades of pollution," said Dingell. "Today, we are able to kayak the river and enjoy all it has to offer. This is what 50 years of work looks like, but we can't turn the needle back now. We must continue to cleanup and not allow new chemicals and threats to endanger our water."

"I thank the Friends of the Rouge and partners for putting together today's tour of the Rouge River. While Kayaking from Melvindale to River Rouge, we passed by AK Steel, Marathon Petroleum Refinery and DTE. I saw firsthand the importance of protecting our waterways," Rep. Tlaib said. "Fifty years ago the Rouge River caught on fire because it was heavily polluted. We still have so much work to do in cleaning it and its watershed up. This work will also help in continuing to create safe fishing and greenways for families. I look forward to working with Rep. Dingell and my other colleagues in the Michigan delegation to ensure that we not only safeguard the environmental progress we've made, but expand on it as well."

50 years ago on October 9, 1969 the Rouge River caught fire with flames over 50 feet high, burning for hours. The fire was a result of pollution and environmental neglect of the river. From 1956 to 1948, 5.93 million gallons of oil were dumped into the Rouge River and Detroit rivers each year.

The burning and environmental neglect of the Rouge river a is credited to jump starting the passage of the Clean Water Act in the late 1960s. For decades since the fire, the Rouge River has seen a turnaround in water quality and an increase in wildlife species.