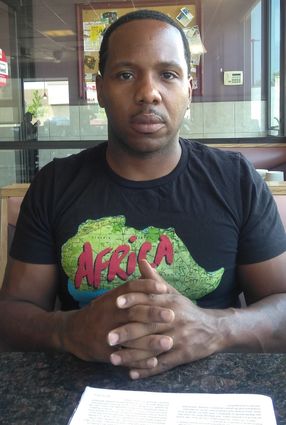 41 year-old Black man, Ramone Jackson, has spent most of his life living in Detroit and he is intense when discussing how city government has failed the people it is supposed to represent. Jackson is convinced that, given the nearly $825 million dollars Detroiters contribute to the budget every year[1] along with hundreds of millions of dollars in federal grants the city has received during mayor Duggan's administration[2], its residents should not be living in such destitution and squalor. Jackson believes the problem is not that Detroiters are destitute; the problem is that their funding and resources are being withheld, misappropriated and given to outsiders.(Only two percent of Detroit's billion-dollar budget is redistributed to its neighborhoods and communities [3].

"The funds need to go back to the people," said Jackson. "This will eradicate a lot of the poverty and the crime in the city. And I can show the people exactly where the streams of money are located."

He explains that since the 1960s, Detroit has received billions of dollars from the United States Department of Housing and Urban Development and other federally mandated funds, much of it in the form of Community Development Block Grants (CDBG)[4]. These grants are specifically earmarked for poverty-stricken cities and Detroit is the largest and Blackest impoverished city in America. According to CDBG eligibility requirements, "not less 70 percent of CDBG funds must be directed toward neighborhood revitalization, economic development, and improved community facilities and services [5]. Other uses specifically mentioned are restoration and demolition, rehabilitation of residential structures and construction and improvement of public facilities. Moreover, project selections must include citizen participation in areas where the guarantee proposes to use CDBG funds. According to HUD guidelines, the proposal or plan must provide citizens with reasonable and timely access to local meetings; an opportunity to review proposed activities and program performance and provide for timely written answers to written complaints and grievances. "The problem is people in poverty-stricken areas don't know this money is coming to them to improve their condition," Jackson said. "Last year 100 million dollars was sent to mayor Duggan and the Detroit Housing Commission for Section 8 and Section 3 HUD funding. This money can be used to repair and to remodel houses in Detroit and to help homeowners that are in financial distress" [6].

Mayor Duggan has spent hundreds of millions in federal funds, and has used $265 million dollars in federal Hardest Hit funds on his controversial home demolition program[7] yet funding that can be used to help Detroiters stay in their homes are funneled into paying two primarily White, suburban-based demolition companies,Adamo andHomrich. (Of the 527 demolitions performed by nine companies in 2018, only 24 were completed by Black owned companies).[8]In September, Duggan asked the city council to approve the issuance of a municipal bond to borrow 250 million more dollars to jumpstart his demolition program down the same track.[9](Detroit taxpayers will be on the hook to repay the loan with interest).

Critics say the Duggan administration has focused almost all its efforts on rebuilding and revitalizing onapproximately7.2 square miles of Detroit (particularly downtown and Mid-Town) while the remainder of the city (some 132 square miles) is left to waste away. This focus on select, exclusive areas of Detroit has also resulted in almost 42 percent of CDBG funding being diverted to pay off delinquent loans made to large businesses by Duggan's administration. Two of these loans were made to the Westin Book Cadillac and the Double Tree Fort Shelby hotels [10]."The vast majority of our investment in downtown and midtown is private investment," stated John Roach, director of media relations for the Duggan administration. "Of course, there are public incentives to help make large developments economically feasible. Meanwhile, they will generate tremendous income taxes that will go to the city's general fund and allow us to provide more services that benefit neighborhoods."

Yet, Jackson is convinced that Detroit is teetering under the weight of poverty because of dis-investment, neglect, and misappropriation of its taxes and federal funds. And that the mayor has failed the residents by ignoring federal provisions in the Housing and Community Development Act, the Community Reinvestment Act[11] as well as the Americans with Disabilities Act by not setting up regular meetings in communities throughout Detroit and by denying participation to poor and handicapped Detroiters by holding regular meetings downtown at CAYMC while failing to provide parking or accessibility to the poor and the disabled in violation of city, state and federal law).

The Community Reinvestment Act is designed to compel commercial banks and savings associations to provide loans to meet the financial needs of low to moderate income communities where they establish their bank branches. These loans can be in the form of mortgage, home improvement, business and to reverse urban blight. And though it is obvious that banks residing in Detroit neighborhoods are failing miserably in this capacity, Jackson contends that there is little effort from the mayor or city council to influence the banks or the federal government to rectify it [12].

Also, 70 percent of people who have jobs in Detroit live outside of the city; and 60 percent of Detroiters that have jobs must travel outside the city to get to them. Then there are the chronic water shut-offs, evictions, tax foreclosures on homes and properties many of which are blatantly over assessed for their taxes. And amid this the City Council conceded in 2013 to use over280 million in public funds for a new hockey arena built by billionaire Mike Ilitch. The City Council also awarded Marathon Ashland Petroleum (one of the worst environmental polluters in the state) 175 million dollars in tax breaks to expand its refinery. And recently Duggan with the approval of City Council made a land swap deal with FCA/ Chrysler where50.6 million of Detroit development funds were allocated, and Detroit owned land given away to build a new auto plant with the promise of jobs to Detroiters. (The promise is not legally binding).

"The reason people are not up in arms is because they are not conditioned to think of the money that's coming to them and that they are paying in taxes, as really theirs," explained Jackson. "That's the only way that people will give up their money, walk away from it and not demand a return on it."

[2]Federal aid to Detroit more than $2 billion; but to what end? By Clifford F. Thies, Professor of Economics and Finance at Shenandoah University, Heartline Institute. August 3, 2013 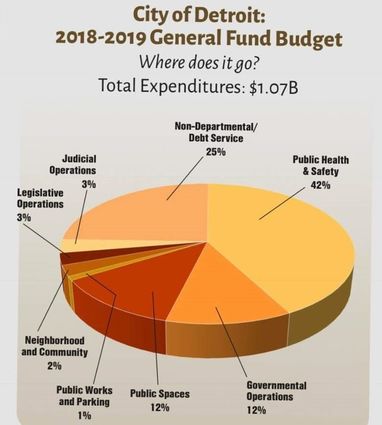