Do you know the words to Lift Every Voice and Sing? 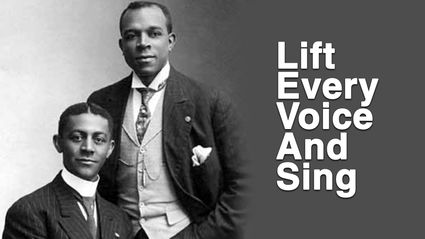 For those of you that know me, you know I have a thing about The Black National Anthem' – Lift Every Voice and Sing. Last year2019, was the 100th year anniversary of the song/poem. Lift Every Voice and Sing was written as a poem by NAACP leader James Weldon Johnson (1871-1938) and then set to music by his brother John Rosamond Johnson (1873-1954) in 1899. It was first performed in public in the Johnsons' hometown of Jacksonville, Florida as part of a celebration of Lincoln's Birthday on February 12, 1900 by a choir of 500 schoolchildren at the segregated Stanton School, where James Weldon Johnson was principal.

Today "Lift Every Voice and Sing" is one of the most cherished songs of the African American Civil Rights Movement and is often referred to as the Black National Anthem.

Now that you know the history of the song....Do you think you can learn the words?

Nothing burns me up more than attending a Black History function, a NAACP program or a Church function and the people in the audience are reading the words. I believe people should at least know the first stanza.

Some people tell me, 'Don't be so hard on them, they will learn the words'. I say 'When?' If people can learn the words to the songs on the radio or the theme songs on their favorite movie, why don't they take the time to learn these three verses. The song is the 'Black National Athem', and it is 100 years old. It is OUR song.

I challenge you to learn the words. Sing it with your children, parents and family. There are several versions on https://youtu.be/gPt1__b-DgI for you to watch and listen to until you memorize the words.

February is just about over, however, at the Telegram, we celebrate Black History every week. Lift Every Voice and Sing is part of our history. It is the Black National Anthem. Learn it and the next time it's time to sing it, sing it with pride from memory