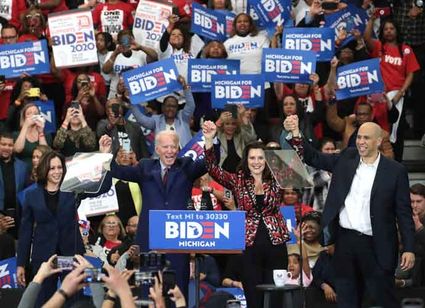 Former Vice President Joe Biden campaigned in Detroit on Sunday and Monday. He didn't turn out crowds like Sen. Bernie Sanders did, but ultimately he got more votes.

DETROIT ― Former Vice President Joe Biden has won the Democratic primary in Michigan, according to network projections, demonstrating the breadth of his political coalition and dealing a heavy blow to the campaign of rival Sen. Bernie Sanders (I-Vt.).

Six states held primaries on Tuesday, but Michigan was the biggest and, in the eyes of many political observers, the most politically important.

It has been a key target in Democrats' plans for the general election ever since President Donald Trump narrowly won the state four years ago. It is also the state where Sanders upset Hillary Clinton in the 2016 Democratic primary, temporarily reviving his campaign after a series of losses.

Sanders had hoped to repeat the feat this time around, especially after several other presidential candidates recently dropped out, effectively narrowing the primary to a two-man race. The senator spent three days campaigning across the state, drawing more than 30,000 people to his rallies.

"Tuesday is a very, very important day, and Michigan is the most important state coming up on Tuesday," Sanders said Sunday in Ann Arbor, speaking to a crowd of mostly young voters, his strongest constituency. "We need you to come out or to vote early. We need you to bring out your families and your co-workers."

But those voters didn't turn out ― or, more precisely, they didn't turn out in sufficiently large numbers. And on Tuesday night it was Biden, who lost early contests in Iowa and New Hampshire, declaring victory.

The voting pattern was consistent with returns from Super Tuesday a week ago, when Biden won every major contest except California's. Although Sanders enjoyed his customary large advantage among young voters, according to exit polls, Biden won more votes from older people, women and African Americans.

Notably, Biden won among voters who told pollsters they made their choice in just the last few days. He and Sanders basically got equal support among those who had decided earlier.

Combined with the results from other states voting this Tuesday ― especially in Mississippi, where Biden was on track to win handily ― Michigan puts Biden well ahead in the delegate count.

It has also left Sanders with precious few opportunities to make up the gap with Biden, although the 2020 campaign has defied predictions several times already.

Sanders, who like Biden canceled a rally because of coronavirus concerns, declined to make a public statement on Tuesday evening. Biden, in his remarks, made a plea for party unity.

"I want to thank Bernie Sanders, and his supporters, for their tireless energy and their passion," Biden said. "We share a common goal. Together, we will defeat Donald Trump. We'll defeat him together. We'll bring this nation together."

"Tonight we are a step closer to restoring decency, dignity and honor to the White House," Biden said. "That's our ultimate goal."

Biden Got A Big Assist From Labor

As in many of the March 3 primary states that turned him into the undisputed front-runner in the Democratic field, Biden had virtually no campaign infrastructure in Michigan ahead of Tuesday's election. But the new guard of Michigan's labor movement became a critical partner for him.

While the United Auto Workers, still Michigan's most powerful labor union and a pillar of the state's Democratic establishment, typically would be a natural organization to offer Biden's campaign a turnkey mobilization base in the Great Lakes State, the union has its hands full with an embezzlement scandal that has ensnared several former union leaders.

Instead, Unite Here Local 24, which represents hotel, casino and food service workers ― and which is predominantly made up of Black women, the vast majority of them in metro Detroit ― has been a key player.

The Unite Here local operated a dawn-to-dusk phone-banking operation for Biden at its headquarters on the banks of the Detroit River. It delivered a delegation of volunteers on Sunday to fill out the ranks of a Biden campaign canvass along with members of the International Brotherhood of Electrical Workers. (Unlike Local 24's parent union, which is still neutral in the Democratic primary, the international IBEW has endorsed Biden.)

And on Tuesday, Local 24 sent a text message to every one of its Michigan members reminding them of the Biden endorsement and encouraging them to vote.

Nia Winston, who rose from a job as a cashier at the Motor City Casino to become president of Local 24, told HuffPost on Sunday that the endorsement reflected the views of her members, who want a candidate who will be able to beat Trump. (Hundreds of members voted on the endorsement during previously scheduled March 3 meetings in Detroit.)

"I like Bernie," Winston said. "But at the end of the day, we're going for the winner. And we know that Joe Biden can defeat Trump."

Biden's interpersonal warmth clearly helped him win Winston over. When she met him at a Labor Day event in Detroit in 2014, she said Biden described himself as "honored" to meet her and asked about her union and the work it was doing.

I like Bernie. But at the end of the day, we're going for the winner. And we know that Joe Biden can defeat Trump.

By contrast, though Winston got the chance to ask Sanders a question at Unite Here's presidential candidate forum, she said she never had any one-on-one time with him. (Winston also opposes "Medicare for All" and tuition-free public college. "Someone has to pay for that ― and someone will be the citizens of the United States.")

Duggan's campaign staff helped drive some union turnout to Biden's star-studded rally at a Detroit high school on Monday night, according to a Duggan campaign spokesperson and a Michigan union official with knowledge of the matter.

But Local 24, which didn't need a push from the mayor to arrive early with a large delegation of members, got prominent placement at the rally. Local 24's members, clad in their red union T-shirts emblazoned with the words "One Job Should Be Enough," occupied the entire middle section of the stands behind Biden, forming the enthusiastic backdrop for his speech.

African Americans Were Another Key To Victory

Sanders owed part of his success in Michigan in 2016 to higher support among the state's Black voters than he had received in Clinton's Southern strongholds. He picked up 28% of Michigan's Black vote, according to a CNN exit poll. 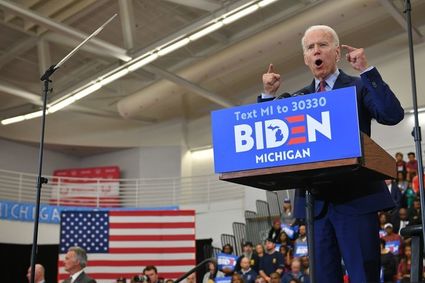 In the final stretch before this year's primary vote, the Sanders campaign was still hoping that the young Black state residents and Black union members who backed the senator in 2016 could help propel him to an upset victory on Tuesday.

But at the election-eve rally, the Biden campaign made a clear pitch to Michiganders of all races who'd backed Sanders four years ago to cast their votes for Biden on Tuesday.

Michigan Lt. Gov. Garlin Gilchrist (D), a Black software engineer and progressive activist, professed to the racially diverse crowd that while he had voted for Sanders in 2016, Biden was the right choice this time. The difference was that in 2016, "nobody with the record, results and relationships of Joe Biden was on the ballot," he said.

By Daniel Marans and Jonathan Cohn