For too long, law enforcement and the criminal justice system at large has racially profiled, arrested, convicted, and sentenced African Americans more harshly than the rest of America.

The worldwide protest is making a bold and collective statement that the 'Black Lives Matter' and it is time for change.

Protesting is a key step to problem resolution. Addressing the problem where it stands is also an important step. Then there comes change. Whether it is a national legislative change, a local change or statewide change. Change is the end result.

The leadership of the Western Wayne County (WWC) NAACP released a joint statement on May 31st stating that processes must be implemented so that another killing of an unarmed African American will not happen. They understand that this won't happen just because people wish it to happen. Action must be put in place. 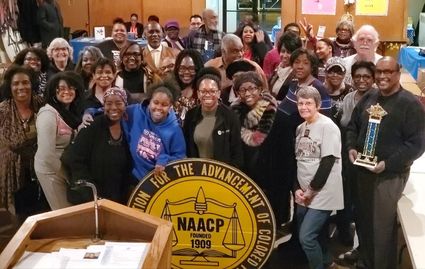 Members of the WWC NAACP at a membership meeting

The second Listening event will be with Millennials on Saturday 13th at 4pm. They are looking for people from 17 to 35 years of age to get on the ZOOM call to talk about their interactions with the Police Department. The 3rd Meeting will be with the second set of Police Chiefs on Monday, June 14th at 2pm. The community can participate by getting on the ZOOM call. The Meeting ID information is on the WWC website – http://www.westernwaynecountynaacp.com or you can call 734-506-0676 or email [email protected]