Vigil Held in Dearborn to Honor Victims of Beirut Explosion 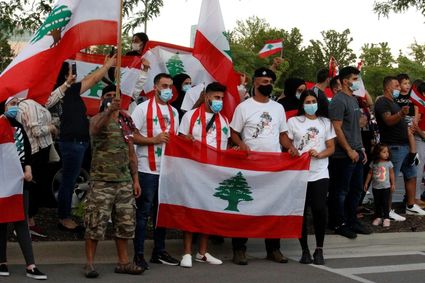 Lebanese Americans and Dearborn residents showed their support for Beirut victims of the massive explosion.

A candlelight vigil was held in Dearborn Friday evening, August 7, to honor the lives lost in a massive explosion in a Beirut port earlier in the week. The vigil was held in the parking lot of the Dearborn Police Department and allowed distressed Lebanese Americans along with other local residents to express their grief.

"The point of this evening is to show support, to stand heart to heart with our fellow Lebanese people who are suffering from what happened recently in Beirut," said the event's organizer, Hussein Hachem. "So many families are impacted...whether they lost a loved one, whether their loved one is still missing and not found, or whether their loved ones are wounded."

The explosion in Beirut, which occurred on August 4, is believed to be the result of a fire igniting 2,750 tons of ammonium nitrate which had been stored at the port. Lebanon's president has since rejected calls for an international investigation by the United Nations Human Rights Commission. Hachem says he hears estimates that roughly 300,000 people have been displaced due to the destruction of homes near the blast area.

People attending the vigil waved Lebanese and American flags as speakers and elected officials expressed their condolences and support for the community. Congresswoman Debbie Dingell told the crowd that the first airplane carrying humanitarian aid from the United States to Lebanon had already arrived and two more shipments of aid are expected.

"This is my community, and I've been on the phone with them all week. They're scared, they have family members, and at first many weren't sure if their family members were okay," the congresswoman said. "This really matters to them, and they wanted to come together and I'm coming to support them," she said.

Ali Osseili attended the vigil. Osseili arrived in Dearborn from Beirut in 2015. "I have two uncles in Beirut, and all my friends there, they're in Beirut," said the 22-year old. "Thank God they're alright, thank God nobody got hurt, but still, all the people that died, all the people that got injured, that's sad." Osseili was one of many who expressed frustration with a corrupt government in Lebanon. 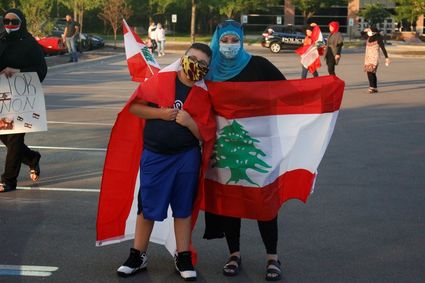 Lebanese families came out for a vigil in Dearborn to honor victims of the explosion in Beirut.

While attendees to the vigil were united in spirit, social distancing was still the order of the day. Hachem's What's Up Media Network provided masks, hand sanitizer, and bottled water for the event. Both Hachem and Dingell urge those who wish to donate to organizations that are sending aid to Beirut to make certain the organization are reputable and legitimate. Hachem suggests Zaman International and the Lebanese Red Cross.

About 200 people attended the vigil. When asked what message he would send to the people in Beirut, Hachem said, "We want to tell them Dearborn stands with you and your pain is our pain, and what happened there is impacting all of us here."

To send aid to Beirut via Zaman International, go to http://www.zamaninternational.org and find the disaster relief link at the top of the main page.