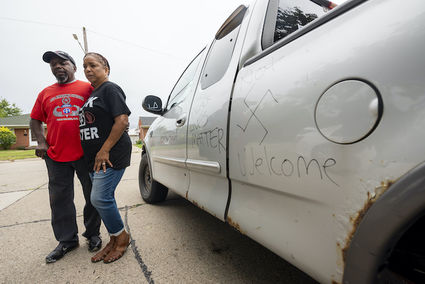 Eddie Hall, Jr. and his wife Candace stand beside their truck with racial remarks on it

WARREN, Mich. (AP) - A white man accused of firing shots into the home of a Black suburban Detroit family who put a Black Lives Matter sign in their front window asked for forgiveness during a court hearing Thursday.

Michael Frederick Jr., 24, made the remarks after being given a moment to speak about bond. He was appearing by video in Warren District Court for arraignment on charges including ethnic intimidation.

Frederick told Judge Michael Chupa that he wanted Eddie and Candace Hall to forgive him.