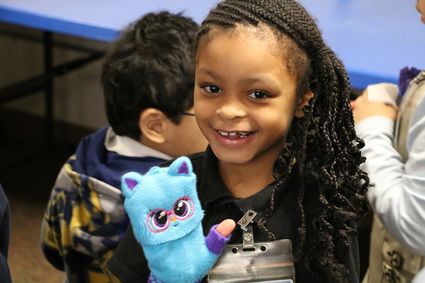 Mittens for Detroit uses as its tagline, "Warming hearts, two hands at a time." Indeed, the 501(c) (3) non-profit has been delivering mittens and gloves by the thousands to metro Detroit children and adults for a decade. Mittens for Detroit (MFD) was established in 2010 by actress Erin Cummings while she was working on the television show "Detroit 1-8-7." The actress was struck by how metro Detroiters were taking care of one another during the economic recession that gripped the nation, and decided to start a community initiative to help out.

In 2013, Wendy Shepherd joined on as executive director of MFD. Born in Detroit and raised in Oak Park, Shepherd says the position is a natural fit for her. "My dad was on city council and mayor for 25 years," she says. "I grew up learning that public service is what you do, that helping your community is what you do; I grew up in a family that was very involved in trying to make the world better, even one person at a time."

MFD collects, purchases, and distributes new, unused mittens and gloves to children and adults in need in Detroit and underserved communities. Shepherd says nearly 300 collection boxes are placed throughout the community at businesses, libraries, schools, and community centers. Donations of hand-knit mittens arrive from all over the country as well. "That's the part that's so encouraging, especially over this last year, to see how many people really care and want to make sure that people are taken care of-people they've never met and they're not going to meet-and they still care about their neighbors," she says.

On a normal year, roughly 32,000 pairs of mittens and gloves are collected and distributed among 100 distribution partners. Those partners include Alternatives for Girls, Covenant House of Michigan, Michigan Veterans Foundation, and Dearborn, Detroit, Hamtramck, and Highland Park Schools, to name a few. 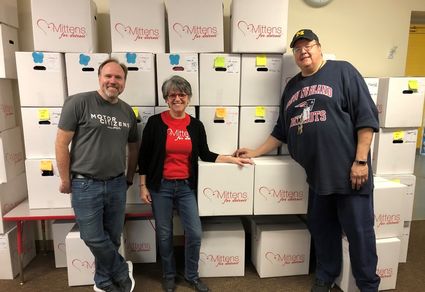 Wendy Shepherd of Mittens for Detroit poses with FCA's Jeff Kalinowski and Hamtramck Schools' Chris Wilinski as mittens and gloves are delivered to school students in Hamtramck.

Monetary donations to MFD are tax-deductible and allow the organization to purchase new pairs at greatly reduced wholesale prices. Since it was established, MFD has distributed more than one-quarter million pairs of new mittens and gloves. In 2020, the pandemic threatened to hamper the organization's efforts. Fundraising activities were cancelled and those collection partners who were uncertain of their own fate told Shepherd they would not be participating by hosting a collection box; 75 percent of MFD's collection partners bowed out. Shepherd began applying for grants and contacting longtime donation partners and previous supporters, who eventually came through. "Little by little, money started coming in," says Shepherd. "It goes back to exactly where we started in the middle of a recession, when things were so hard, people cared about the people they don't know...they know what it's like not to have gloves."

Thanks to generous donations from people all over metro Detroit, it appears MFD may actually meet its goal of providing warm mittens and gloves to thousands in need of them this winter. Despite the uncertain year, Shepherd says, "This is by far, still, my favorite job I've ever had, I love this job."

Yearly collection takes place from October 1 to January 31. If you would like to help out, there is still time to donate. Volunteers will be needed come late spring for sorting and boxing mittens, and office tasks. Find out more at http://[email protected] or see the organization's Facebook page at http://www.facebook.com/MittensforDetroit.