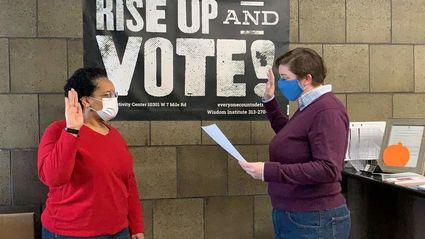 Oath of Office administered by Attorney Andrea Enright on January 1, 2021

Attorney Lisa Martin brought with her more than 20 years' experience in the legal field when she decided to run for a seat on the 34th District Court. A resident of Van Buren Township, Martin had previously served as attorney magistrate in the judicial district for nearly two years. Martin triumphed over fellow attorney Alexandria Taylor on November 3 to win the judgeship. She assumed the office on January 1, 2021, becoming the first African American elected to serve as Judge of the 34th District Court.

For Martin, the position carries a responsibility to the community. "It's about a l...