COVID-19, Safety in the State House & Exoneration of people 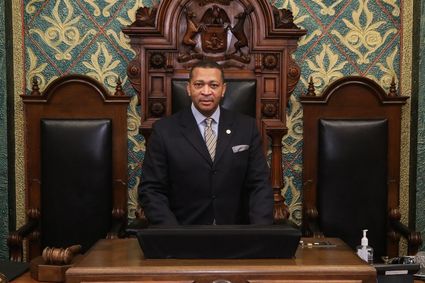 State Representative Tyrone Carter being sworn in for his second term

2020 was more than a year in time. 2020 was a thing that happened to the world. 2020 happened and most of the world didn't see it coming. Individuals like Tyrone Carter didn't have time to see it coming. His duty as Michigan State Representative is to defend the unforeseen punches of 2020, and every second behind it.

Carter has done what he could in 2020, and has thoroughly moved on to the present. The District Six Representative's hands are full with what 2021 has to offer. Tyrone's schedule is filled with intentions of helping the people who need it most. Carter's roadblocks aren't new to his line of work, but he has to come up with innovative methods to make them a part of history's past.

Coronavirus is the first swing that came across Carter's face. The state of Michigan has been using its resources to fight against the waves of the virus. District Six, which includes River Rouge, Ecorse, and portions of Detroit, including Downtown, Bell Isle and Indian Village. He has been diligent in his supervision to obtain tests, vaccines and the resources it needs to start a new degree of normal. There is more money available for more resources. The issue lies within Lansing's divided house. Funds cannot be allocated until both sides can come to an understanding on what needs to be done.

Tyrone's next ventures still have the people in mind, and require assistance from entities outside of him. Carter has spoken with representatives from the Marathon company in regards to the buyout between Schafer and Patricia. The program is shaped for residents who may want to relocate or stay to see what the company can do for the neighborhood. The Innocence Project is Carter's next teammate. Tyrone and the Innocence Project are working together to craft #Bill #4291. This bill will affect the Freedom of Information laws. It will ensure that the proper information will be provided to stop the politics of wrongful convictions.

This does not only protect citizens, but also the reputation of the police officers who do their job correctly. Bill #4291 also protects the taxpayer's money. Which funds legal fees and reimbursement for those wrongfully incarcerated.

The next thing on Tyrone Carter's plate comes right out of Lansing. In wake of last year's April raid on the Michigan State Capital, Carter is working towards the ban on firearms on Capital grounds. The first step included banning the open carry of firearms. This shut down the weekly firearms display that some Michigan residents gathered in the House of Business to see and participate in. Carter knows that firearm presence at the Capitol would aid to the perpetual hostile environment that America is facing today. With bills like this passed raids like the one in Washington D.C would stop before they can even get started.

Tyrone Carter was born and raised in the district he represents. He understands the people inside, and knows exactly what he needs to be done to make a change. Carter does not leave his home as Tyrone Carter. He leaves his home as a Michigan State Representative, often having to answer the needs of the people at the most unlikely times. Like at the gas station, and just out in public. Tyrone is aware that his influence reaches far outside Lansing, and places himself on the line everyday to protect those spaces.

Xavier Jones - Has there been a disparity amongst the districts of Detroit for the distribution of resources?

Tyrone Carter - There are none, and I'm very proud of that. Mayor Duggan has set the standard with how he's handing things. From resources, to vaccine distribution, I must take my hat off for him and the city of Detroit. He's setting the model for other counties, and running ahead of the curve.

Xavier Jones - How do you feel about the Covid vaccine?

Tyrone Carter - For someone who has tested positive, and lived through the symptoms of Covid, I highly advocate for the vaccine. I've lost too many people, and know exactly how deadly it can be. Why would I not take the safer route and get the vaccine? I already know too much not to. I've already had my two shots, and encourage everyone that's comfortable to do the same.

Tyrone Carter - There is a huge amount of people who have been exonerated of crimes. A majority of the people who have been wrongfully convicted are black males. Most of their cases start with the lack of information, or the inability to access it. Most site things like evidence or police reports. The bill will allow access to certain records that will not allow history to repeat itself. This will ultimately stop a cycle that would save lives and taxpayers' money.

Xavier Jones - Where were you when the Michigan State Capital was attacked? 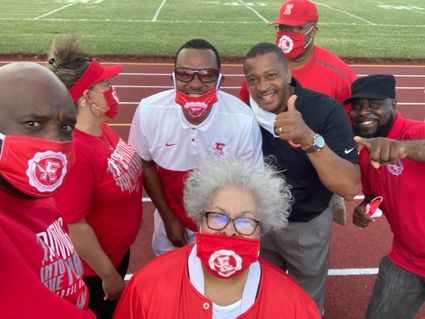 State Rep. Carter in the community at the reopening of the Ecorse track and football field

Tyrone Carter - I was in Lansing, right there inside. I watched it all unfold. It wasn't a surprise for me, so I had time to prepare myself. I had to, one of few black representatives. I was an obvious target. The SWAT training and years of experience I've had working in the sheriff's department set the foundation for what could have happened, if something needed to happen.

Xavier Jones - What's going on to make sure this never happens again?

Tyrone Carter - Myself, and a colleague are working to pass a bill that won't allow guns at the capital at all. Why does anyone need to pile in here with a gun? Sometimes they have open carry days. Where they meet, walk around, and fellowship with their guns exposed. As if they're trying to make a statement. The 2nd amendment is always cited, but there is a time and a place for everything. When people show up like that it creates a hostile work environment; an unnecessary hostile work environment at that.