Wildlife Refuge on Detroit River Open to Welcome the Community 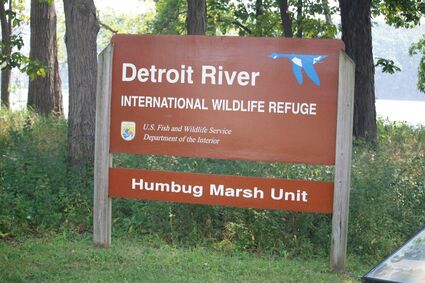 The DRIWR first opened in October 2020

If you've been looking for an additional option to take the family outdoors to interact with nature, consider the Refuge Gateway at the Detroit River International Wildlife Refuge (DRIWR) in Trenton.

Located just 20 miles south of Detroit, the Refuge Gateway Unit covers 44 acres of the more than 6,000 acres of the DRIWR and serves as the headquarters for the DRIWR staff. The land was formerly Chrysler Corporation's Trenton Chemical Plant which ceased operations in 1990, and is cooperatively owned and managed by Wayne County and the U.S. Fish and Wildlife Service (USFWS). "Our goal has been to work in collaboration with Wayne County to restore ecosystem health here at Refuge Gateway and provide people access to the river and deepen people's connection with nature," says Susan White, DRIWR Administrator.

Established by Congress in 2001, the DRIWR is not one large parcel of land however, but rather more than two dozen separate parcels of land or units in both Wayne and Monroe Counties. The wildlife refuge consists of islands, marshes, and waterfront lands along 48 miles of the Detroit River and the western shores of Lake Erie but not all units are open to public use. The refuge would not exist today if it had not been for the efforts of concerned citizens who, in 1998 voiced their opposition to a proposed development which would have destroyed the last remaining mile of natural shoreline on the U.S. side of the Detroit River. Developers planned to fill in Humbug Marsh in favor of condominiums, a golf course, and a marina. The citizens' voices were heard and the marsh was saved. Three years later, the DRIWR Establishment Act was signed into law, laying the groundwork for conservation efforts along the Detroit River and Lake Erie Shoreline. Because Canada collaborates on the conservation efforts, the DRIWR is the only international wildlife refuge in North America.

The Humbug Marsh Unit sits just south of the Refuge Gateway Unit The Refuge Gateway features the recently opened John D. Dingell Jr. Visitor Center, hiking trails, areas for wildlife viewing, a kayak/canoe launch, and a 700-ft. fishing pier. Currently, the visitor center is closed due to a resurgence of COVID-19 but the outdoor grounds are open for exploration during the daylight hours seven days a week. Outdoor programs and activities are taking place as well, including outdoor Yoga classes. "The response from the community has been phenomenal," says White. "In the spring word got out very quickly from the fishing community about the fishing pier and we had hundreds of people out on the fishing pier, it was phenomenal."

The hiking trails flow into the woody marsh area from the visitor center and are a popular destination for visitors to the refuge. "We have a lot of people that come and walk the trails. We've got about three and a half miles of trails over in Humbug Marsh. There are two trails, one that's a little easier, it's about a half mile...and the trail is accessible for people that might be in wheelchairs," says White. "The green trail, which is a longer trail, about two and a half miles, it's a little more rustic and longer but it takes you out to the old growth forest." Dogs are allowed on the trails and must be leashed.

White, a native of metro Detroit, has been with the U.S. Fish and Wildlife Service for 25 years. She says part of the refuge's mission is to help young people see that interacting with nature can lead to a career. "One of our objectives is to be a teaching refuge and helping the community deepen their connection to nature. There are wonderful career opportunities in conservation across the spectrum...with the state and national parks," she says, adding that internships will be one of the opportunities available at the Refuge Gateway in the future. 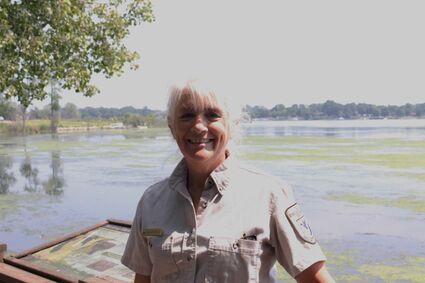 Congressional appropriation provides funding for the wildlife refuge and investment from industry partners, community organizations and individuals will help keep programs and amenities at the DRIWR sustained. White says volunteers are always welcome. "We rely heavily on volunteers, especially in the visitor center, programming, and maintenance. That was the concept all along that this is a community site and many hands make light work," she says. "It's really been very much a community-driven refuge. Every facet of community from federal government, state government, municipalities, industry, NGOs, community groups, and private citizens; there has been an outpouring of support and engagement and that's what is so wonderful and I feel real lucky to be here."

The DRIWR Headquarters and visitor center is located at 5437 West Jefferson Avenue in Trenton. For more information, call 734-365-0219 or visit http://www.fws.gov/refuge/detroit_river to find out about events at the refuge. Visit the refuge's Facebook page at http://www.facebook.com/DetroitRiverIWR.