Local Business Puts the Emphasis on Men and Beard Grooming 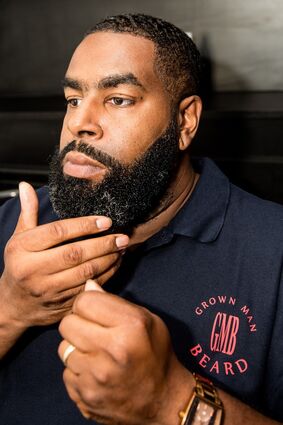 Most of us encounter one each and every day without giving it much thought: a man with a beard. In fact, it is estimated that about 55 percent of men around the world have some type of facial hair. One Livonia businessman has spent the last 30 years focusing on his own facial hair and later creating grooming products to enhance the health and appearance of his beard. Donald Williams says that when he graduated high school, he sported a beard but there were not any type of grooming product for men's facial hair available at that time. About 15 years ago Williams says he began making his own. "I use all-natural essential oils and just experiment with them and see what works best for me," he says. The idea caught on with his bearded friends who wanted some for their own beards as well.

Williams and his wife, Kelli, a professional hair stylist, own a salon in Livonia, Salon Ambience. With the arrival of the pandemic, he says they decided to launch the men's beard product line as a business and Grown Man Beard Products was born. After all, he had been creating beard care products for more than a decade for himself and his friends. Williams says he leans on his wife's expertise in the skin and hair care area and has learned through research and trial and error exactly what works and what doesn't. He says he shares what he knows about facial hair care through consultations with new and potential customers. He currently has a "how-to" video on You Tube in which he explains how to use his products. Find it at http://www.youtube.com and enter GMB Beard Products in the search box.

Grown Man Beard (GMB) currently offers beard wash, beard oil, beard butter, conditioner, and a wooden pick for combing beards. "I just wanted to give men a product to have confidence in themselves. My product ideais, I want you to look good so you feel good," he says. "My product now is a universal product, it doesn't discriminate, it's not a white or black thing, and it's not short hair or long hair because it's also for the skin. All the ingredients I use add hair and skin benefits." 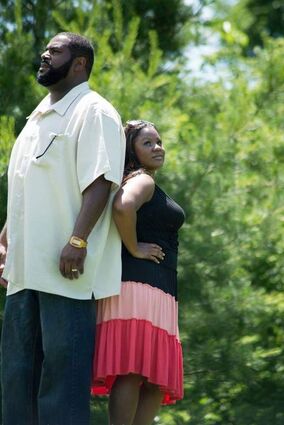 Donald and Kelli Williams are business owners and know a thing or two about beard and skin care.

A father of four, Williams says parenthood, his job with Delta Airlines, and working to set up his business have all kept him very busy but he wouldn't have it any other way. His business is being noticed as he already receives inquiries on social media and online orders from other states. His goal for his products is to gain significance and to have his products sold in retail stores nationwide but he knows it all won't happen overnight. He says it has all been a learning process as he navigated legal matters, the internet and creating a website, and networking. He encourages anyone who may be considering starting their own business to take that chance. "Just do it. People always make excuses for why they can't do anything," he says. "You gotta just do it because if you don't have faith in yourself, who's going to buy a product from you? You're going to make mistakes but learn from your mistakes."

Grown Man Beard Products make a great holiday gift idea. To find out more about GMB Products, go to http://www.grownmanbeard.com or see William's Facebook page at http://www.facebook.com/Grnmanbrd/. Products can be purchased online or at Salon Ambience in Livonia. Williams can be reached at [email protected] or at 734-221-0794. Products put out by Kelli Williams can be found at http://www.blingandbeard.com.