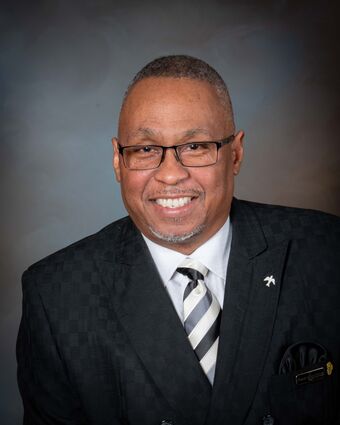 Gregory McClary has been a licensed funeral director for more than 40 years and owns Chapel of the Chimes Funeral Home in Westland.

Sorting through the tasks involving the end of a life has been his life's calling for Gregory McClary, owner and manager of Chapel of the Chimes Funeral Home in Westland. At the age of nine, McClary recalls his decision to one day become an undertaker, the term used at that time, while he and his mother tended to his great-grandmother's funeral. A year later at the age of 10, McClary's mother engaged him in an afterschool job at a local funeral home in South Carolina, where he was raised. He began with sweeping floors and taking out trash, but demonstrated a great interest in the work of a funeral director.

"They took an interest in me and from that age on up, I stayed at it, graduated from high school, went to mortuary school, came back and served my internship," he recalls.

A graduate of Gupton-Jones School of Mortuary Science in Atlanta, Georgia, McClary was first licensed as a funeral director in 1980. He worked at several funeral homes in South Carolina before moving to Michigan in 1998, where he found positions at funeral homes in Battle Creek, Grand Rapids, and Detroit. Beginning in 2005, he has been qualified as a Certified Funeral Service Practitioner (CFSP) with the Academy of Professional Funeral Service Practice and serves as an Ambassador and Lifetime Member with the academy. He is also a member of the National Funeral Directors Association and the Michigan Funeral Directors Association. In addition to being a licensed funeral director and embalmer in the state of Michigan, he is also licensed in the states of Indiana, New York, and South Carolina.

In 2009, McClary took ownership of Chapel of the Chimes, which had originally been used as an additional chapel for the Diggs family's funeral homes. A lifelong learner, McClary has taken every opportunity for professional and personal enrichment, participating in educational advancement to provide the highest level of care to families in a time of need and grief.

"The most important thing I find satisfying is when I know I've done all I can to make it as easy as possible for families who are going through a difficult time, just to help families get to that point where they can grieve properly," he says. "We cannot solve grief but we can get them to that point where they are able to grieve and come to a resolution that they can deal with the loss of a loved one and then they can work on going forward with their lives."

McClary says one notable challenge faced by funeral directors is dealing with a grieving family whose members are fragmented, due either to distance or disagreements. While families may bicker, stepping into the midst of family discord and trying to unite the members can be difficult he says, adding that the hard part is, "Trying to get families to come together at a time like this and to realize that somebody had to die for them to even come see me."

Family issues aside, McClary says the COVID-19 pandemic has brought its own set of challenges and has interrupted the grieving process for many a family. "It's like you're dealing with an enemy you can't see, yet you're trying to live and you're trying to help other people live as well," he says. McClary and his staff have come together as a team to meet the challenge, utilizing technology to live-stream funeral and remembrance services. He adds that in some instances if the deceased died of COVID, many times other family members tested positive for the virus or became ill themselves, delaying the process of making final arrangements or having a funeral service at all. In some instances, multiple members of a family died of COVID.

McClary says they all have maintained precautionary protocols including taking temperatures of all who come in the door, constant disinfecting of surfaces, and contact tracing. As essential workers, it all meant more work and more stress but he adds they found relief in an unconventional manner: laughter. "We could have sat around all gloom and doom but we tried to find something all during the day to laugh about. I think that laughter has helped us to get to this point," he says. "We have to get through it to help other people get through it."

McClary urges people to consider pre-planning final arrangements because having a plan in place can be invaluable when the family is distressed and grieving. "Learn your funeral director before you need a funeral director. Talk and get questions answered before you need to ask them," he says. "Our service doesn't end at the cemetery or the crematory, our service is always to go beyond and I feel that has been the standard that makes people come to us and we hope it makes people choose us because we're going to give you that excellent service."