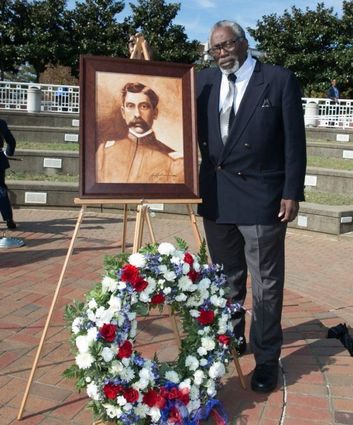 Photography can be an elusive profession to describe. Part art form and part science, a picture has the power to convey much more than an image. It can elicit both a thought and a mood, and can be simultaneously artistic as well as political in its sentiment and expression. One can surmise that photography is a merging of painting, science, and literature.

Dale Rich has accomplished this synthesis, producing images through what he describes as his "Black eye" for over 40 years. It is a reference to how his craft is influenced by his Black American experience.

A native Detroiter, he became interested in photography while attending Cass Technical High School. He was an avid student and learned the principles of lithographic arts which he, with the help of a friend, was able to transfer to photography.

Rich obtained a small, inexpensive, instant camera and took pictures of people and places around his neighborhood. He credits his debut as a professional when he took pictures at the Motown Review in 1968 at Detroit's Fox Theatre. "Every year you'd have a dozen Motown acts," said Rich. "And you'd find Smokey Robinson, the Temptations, Gladys Knight and other great singers and entertainers, and I thought this would be a nice venue for shooting photographs."

He borrowed a 35mm camera and embarked on a journey that has taken him down many roads and across many thresholds. Some of his most iconic photos were of infamous preacher Jim Jones, taken a few months before the mass killings at Jones Town; the burned home where kidnapped heiress Patty Hearst was held by the revolutionary group the S.L.A; and the crossing of the Edmund Pettus Bridge in Selma Alabama on the 45th anniversary of what is known as Bloody Sunday.

Rich is also acclaimed as a researcher and historian for documentaries. He is a collector of Black American images, and has put on many photo exhibits in libraries, universities and other institutions of learning that showcase the lives and the experiences of African Americans.

As a young man, he joined the army and studied history at George Washington University, where he developed a keen interest in Black history. He was asked by an instructor to name an African American other than Booker T. Washington and George Washington Carver who has done anything significant in American history. And it was this incident that blossomed into him working on over 15 television documentaries, three of which earned Emmys. Rich has also spent many years researching the lives of Black American soldiers and sailors that received America's highest military award- the Medal of Honor.

He's traveled across the country to do research in the National Archive, the Library of Congress, as well as visited Civil War battlefields and cemeteries in his quest to bring attention to their stories.

Rich's research and photographs have contributed to numerous books including, Black Union Soldiers in the Civil War, Forbidden Fruit, Freedom by Any Means, Love Stories from the Underground Railroad, 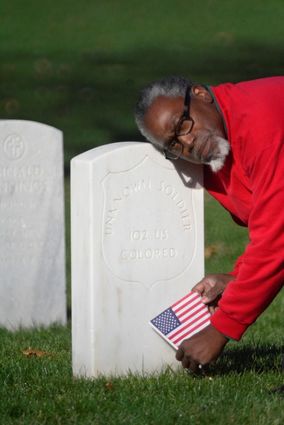 Dale Rich at the grave of the Unknown Soldier

and Black Detroit. He's conducted photo exhibits in Detroit, Ann Arbor and other cities throughout the United States. In this he provides a photographic history of Black America, and this service is priceless.

"My strength is in my photographic catalogue," said Rich. "In the 90's I started doing work on women, and I'm still doing that. I had an exhibit called "Four Women" based on the song by Nina Simone. It was about four Black women that are in the struggle. And I have a photo exhibit of Michelle Obama, Coretta Scott King, Winnie Mandela, and a local woman. My whole goal is to do exhibits that relate to Black history."