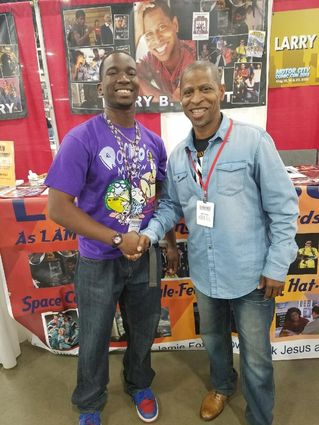 Larry B. Scott is an American screen actor that's been on set

Nothin' But a Sandwich. Staring with Cicely Tyson in the role of a troubled teen. He's been in over sixty titles and counting. But got his big break with the 1984 cult classic, Revenge of the Nerds. Taking on the role as Lamar Latrell, an openly gay fraternity member. Scott scored a role in the sequel, and played in the 1980's films Space Camp and Fear of a Black Hat.

This humble, and eccentric New York man loves his job. Scott proudly considers himself a road layer for the current

generation of actors. He sits silently in the shadows, soaking in his own legacy. While the young bucks get to hog all the

glory. When I met Mr. Scott at the 2018 Motor City Comic Con his line wasn't overflowing with fans. But he was comfortable, happy and walking on air his entire stint in Novi. Knowing in his heart, that his decisions ultimately altered the future of

cinema as we know it seemed like payment enough.

Larry B. Scott is a man who loves his fans, life and career.

It's shown by his generous mannerisms and mind blowing

metaphors. He's proud of himself, an armageddon or rapture

couldn't stop that. The hustle never stops for this young man.

Scott operates the acting studio W.I.T. (Whatever It Takes)

Filmwerks. Where he teaches the game to the next generation of hungry minds.

Mr. Larry B. Scott can be followed on Facebook, Instagram and IMDb. I would like to thank the legend again for taking the time out and talking to me!

Jones - What was your start into the acting business?

Larry B. Scott - Actually I started out as a class clown, I had a teacher who cared about the students. They told me, "Hey why don't you put some of that on stage." I was brought to a theatre, where Wizard of Oz was being played. I got

the role as a Broomsweeper. There's no broomsweeper in the Wizard of Oz! They made me a janitor! Right before opening day the wizard dropped out and I got to take the spot.

Jones - Was it hard to balance playing an openly gay black character in 1984?

Larry B. Scott - But back then I got shunned out by a lot of the

brothers. Now it's fine, everyone loves me. My name became,"That's him!" They were thinking, "We finally got a brother on screen and he has to be gay!" But I was always an actor, I just wanted more challenging roles. The more roles I got the more people got to see me outside of role as Lamar Latrell. But you've got to be ready for the heat if your the first one!

Jones - Were you nervous before taking on that role?

Larry B. Scott - No because it's your job as an actor to take on a challenge. I'm from the hood, the projects. I wasn't brought up that way so I knew that wasn't me. I did my part I can't force the audience to like and accept it. A long time since then I've had the right to pick and choose my roles.

Jones - What are you experiences being a black actor? 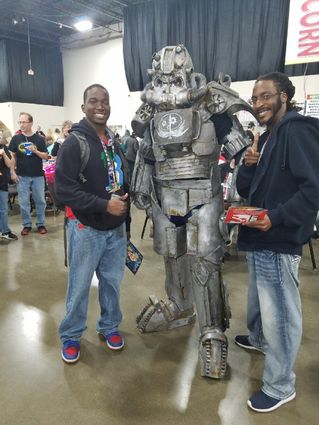 Larry B. Scott - I'm happy I got to pave the way for the black actors of today. I took the risk knowing I wouldn't receive a lot of glory and limelight, but it had to be done. At one point 'brother in the hood' was all they had to offer. I got tired of being 'brother in the hood' so I took on the Lamar Latrell character. The scale is expanding and a wide variety of roles are opening. Black Panther really helped. Next step, we have to produce, create and distribute our own material.

Jones - Can you offer any advice for up and coming actors, screenwriters and directors?

Larry B. Scott - Back in my day you had to work and wait until a studio found you. Now you get up and get it on your own. Don't wait for someone else to do it for you. Social media doesn't guarantee success, but it guarantees that you can get it out there. Which wasn't available twenty five years ago. Do good work! Good work floats straight to the top, nobody talks about the bad work. Do the work and everything else will fall in place. Don't let anyone tell you no, sometimes a no is the best way to a yes.