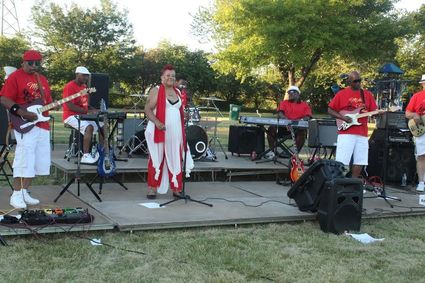 Rouge celebrated the 4th Annual Belanger Park Music Festival over the weekend. Familiar friendly face Mitch Doig put his camera down to organize the festival. His team spent countless hours of fundraising and planning to get the best out of the community and performers.

Denise Davis and the Motor City Sensations started off the two day event. The band rocked out to jams that predates myself, but that didn't stop old and young folks alike from enjoying the vibe. Saturday night welcomed Coretta Bridges, the Two Tones, Mitch, Joni Jakey, and Ms. Tina Laginess even had a few minutes to show the city how well they can play.

Mitch and the crew certainly showed out, next year I hope to see cars coming out of Belanger park. Beforehand, I caught up to Mitch to check on the Music Fest's progress.

Xavier Jones - How did the music festival get started?

Mitch Doig - Originally it was hot dogs and snacks in the park. Someone donated a stereo system, we would meet in the park and listen to music while we ate. First time we had five people come out, another time forty. One thing led to another and we had ourselves a music festival.

Xavier Jones - Where do you recruit the musicians?

Mitch Doig - I try to look local. One time I got a more famous group from an associate, but the goal is to keep it local.

Xavier Jones - What instrument do you play?

Xavier Jones - What outside sources helped make this work?

Mitch Doig - We have volunteers that cook a dish and donate it to the festival, there's always a line of helpers and people who love to fundraise. It wouldn't be the same without their influence.